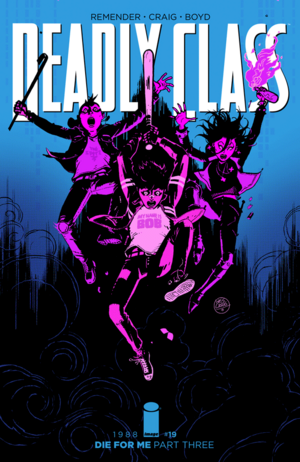 I will let you taste my Sputnik

Plot Synopsis for "Die for Me, Part 3"

At a record store, a metal-head and new wave man argue over music. Suddenly, Billy breaks in and yells for everyone to run. He is being pursued by Victor and his crew. Victor lets bullets fly upon entering the store and many citizens die as Billy escapes through the back. Billy desperately jumps out the back window and Victor doesn't hesitate to follow while the rest of the crew chickens out and decides to head back down the stairs, the slow way.

Victor enters an alley where Billy was last scene. He sees it's a dead end and begins to look around. Billy jumps out of a dumpster and attacks Victor with an iron pipe. Victor is too strong and over-powers Billy. He tells Billy he's been strong since he was little and has seen how Billy slacks off in class. He tells him how his father was a famous KGB member. British assassin broke in to kill his father, but when his father wasn't home they raped and killed his mother. Later, when his father returned, he was beaten for being weak and not protecting his family. Ever since then he has been determined to be strong. Right when Victor is about to kill Billy, Billy unleashes the trap the rats set and a stone pillar crushes Victor's back. Marcus Arguello and Petra reveal themselves and see he released the trap they set for Victor. Billy tells them that Paulie left them and he had to improvise.

However, soon Victor's thugs arrive. Yorseph is hit in the face with Petra's acid as the crew escapes. Off in the distance, they are watched by Dan. Dan unleashes explosive bows from his bow and arrow at them, however, they escape.

Remarkably, Victor gets up and is still alive. They agree to team up with Dan to hunt down the rats as it is currently 3 on 3.

Meanwhile at the school, Shabnam is super excited to touch Kelly Grogda's boobs. However, he prematurely ejaculates and tries to cover it up. He suddenly gets a call and smiles that the person promises to take care of Marcus.

Elsewhere, Marcus and crew hole up in the Tenderloin as it will be the last place anyone looks. Marcus tells Billy he'll help stitch him up as Billy leaves behind a phone that he was positioned to have just used.

Hunted and desperate, Marcus and the rats make a final stand in the streets of San Francisco.

Retrieved from "https://imagecomics.fandom.com/wiki/Deadly_Class_Vol_1_19?oldid=56228"
Community content is available under CC-BY-SA unless otherwise noted.