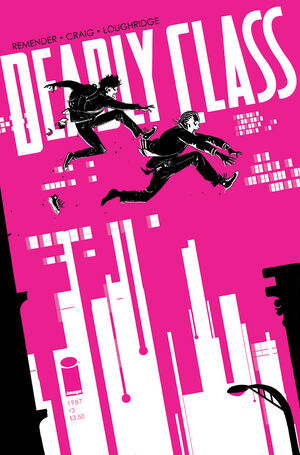 On November 3rd, 1987, Willie and Marcus attempt to jump from one rooftop to another. Willie falls short and grabs the edge of the roof. Marcus grabs onto his hands and pulls him up over the ledge. Marcus freaks out and Marcus notices he's way more intimidated than he thought he would have been.

Marcus shares with Willie that he's terrified of being alone and over analyzes his conversations with people since he doesn't understand people. Marcus believes that believes that people are only nice to ingratiate themselves in people who will support them. Marcus tells Willie he's doing it now by not bringing up that he almost cried when he didn't make the jump earlier. Willie is agitated by Marcus's words and tells him how tough he is because he killed five grown men that had murdered his pops when he was 12.

Later, they continue their conversation about how it's hard to be truthful and honest. Marcus feels that's true bravery. Marcus tells Willie he's trendy and just follows what's new. He says liking your own music is a form of bravery.

To complete their mission given to them,[1] Marcus finds Rory, a disheveled looking man who offers him ludes. Rory tells him a monster with no face came through earlier. Willie signals to Marcus that Rory is crazy. Marcus asks for information on a lead. He wants to know where his old friend from Vietnam went that had committed several crimes.

Marcus and Willie find the Vietnam man in a tent, when he attacks them with a knife, Marcus recognizes him as the man that attempted to steal his shoes.[2] As the man runs away, Willie holds a gun on him but freezes and doesn't take the shot. Marcus is pissed that Willie is such a wimp and doesn't act like a person who's killed five grown men. Willie breaks down and tells him that after his father was murdered, his Uncle Russ came in and killed that attackers. He gave him the gun to help give Willie a reputation on the street.

Marcus and Lewis eat stale beans with Rory under the light of a campfire underneath the Golden Gate Bridge. A monster looking man with no face looks upon them from a distance. As they joke about the day, Rory makes an off comment about torching a village when he was in 'Nam. Marcus beats Rory to death with a wood board.

Retrieved from "https://imagecomics.fandom.com/wiki/Deadly_Class_Vol_1_3?oldid=43733"
Community content is available under CC-BY-SA unless otherwise noted.