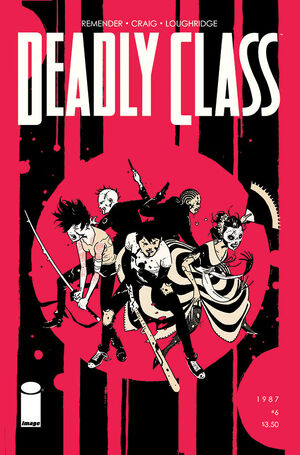 People act that hard ain't never got the fire

Police officers arrive to the convenience store and Chico murders all three officers. He then turns and sees the store owner gasping a the scene and shoots the her since she was a witness. Chico then drags Marcus into an alley in the back and puts the gun down to offer Marcus a chance to kill him. Marcus is too sluggish and begins getting beaten close to death by Chico.

Willie, Maria, Saya, and Billy arrive and beg Chico to stop. When he puts the gun in Willie's hands and tells him to shoot him, Willie freezes again. Chico takes the gun back and raises it to Marcus's head to kill him. Maria slashes Chico's throat, killing him.

The man with the monster face shows up and takes Chico's body with him as ransom. The class is baffled as to what the man wants. He tells them how he abuses animals sexually, and asks Marcus if he remembers him.

They bury Billie's dad[1] in the Mohave desert and they head back to the King's Dominion Atelier of the Deadly Arts.

Retrieved from "https://imagecomics.fandom.com/wiki/Deadly_Class_Vol_1_6?oldid=43736"
Community content is available under CC-BY-SA unless otherwise noted.