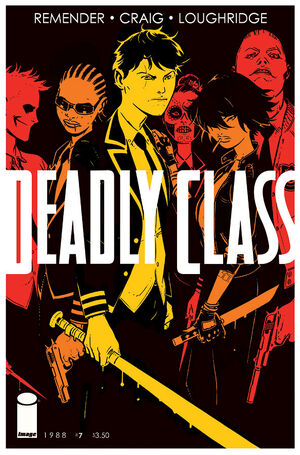 A man is leaving a medical clinic and is approached by Sue Ann who wants him to inspect her privates. We attempts to get away and strikes her in the face when she pulls a knife. He turns around to see Jimmy John along with another man standing behind him with a bat and a saw. They tell him they won't be as gentle as Sue Ann would have been.

Marcus writes in his journal about Maria's mental breakdown and struggle with depression. He thinks about how they work through their issues with sex and how he likes having someone there for him. He thinks about how it's hard for him to be with Maria since the Soto Vatos would find it suspicious for her to be with him so soon after Chico's death.

Marcus heads to a local comics book shop where Willie got him a job. Blain, the store owner, is really nice to Marcus. He's helped introduce him to non-mainstream comics and get him a job.

Saya heads out once a week in an attempt to track down the man who took Chico's body.[1] Marcus continues to think that she's gorgeous even though he's with Maria.

Billy, Willie, and Marcus head out to a party and don't invite Marcus's roommate with them.

At the party, Lex begins picking on Petra and other classmates. Marcus talks back to Lex and tells him he's insecure. Saya pulls Marcus away to protect him since Lex will actually kill him if he is crossed.

Outside, Marcus and Saya almost have a moment but an unseen assassin sends an arrow at Marcus. Saya grabs it out of mid-air. Marcus gives chase to the assailant and de-hoods the attacker to reveal it was Maria. She pleads she knew Saya would stop the arrow and only wanted to send a message to her to not get too close. They kiss and embrace in the night.

At The Tenderloin, F-face is on the toilet for a long time. When his crew come back to tell him about the murder they committed on the man in alley earlier, F-face asks if they wrote his name on the wall like he had asked. When they admit they forgot, he slams one of their faces into the unflushed toilet. Meanwhile, Sue Ann spots someone watching outside their window.

Saya runs away rooftop to rooftop back to King's Dominion Atelier of the Deadly Arts to tell them what she had seen.

At the school, Shabnam reports to Master Lin with Marcus's journal. Master Lin tells Shabnam to continue earning Marcus's trust and to return the journal back to the room so that it appears untouched.

Retrieved from "https://imagecomics.fandom.com/wiki/Deadly_Class_Vol_1_7?oldid=43737"
Community content is available under CC-BY-SA unless otherwise noted.