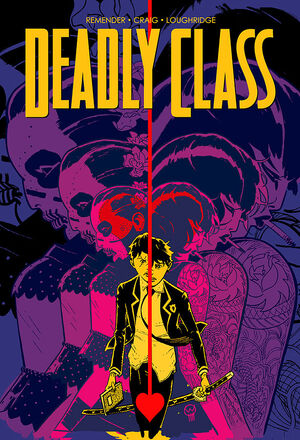 At the King's Dominion Atelier of the Deadly Arts, Saya informs Marcus that she found F-face's lair. Saya demands to know the truth of what they're dealing with. Marcus hands her his journal and tells her to view March 1st, 1986.

Sunset Boy's Home was a sweatshop run by Mrs. Rank. The children were beaten and had quotas to meet for the product they created. Day-by-day, Marcus snuck pins out in his cheek. Marcus thought about how his device was nearly ready, but he might as well as take 10 more. That day, the officers reported Marcus's station was missing a bunch of needles. They pulled Marcus and his neighbor, Sonya, as they are the only ones who would had have access to the needles.

Marcus was put before Mrs. Rank who recited religious comments and racist remarks about Marcus being a Nicaraguan. They strip searched Marcus naked and were unable to find any pins. They decided Sonya was responsible and sent Marcus back to his room.

In the room, he met his roommate Chester Wilson, who threatened to cut him again if he didn't give him what he wanted. Marcus gave him a sandwich he had stolen. Chester rattled off to Marcus how his aunt wouldn't take him in because she thought he had killed his dad. He suddenly started chocking. Marcus admits to having poisoned the sandwich as he strangely began hiding behind a bed mattress. Marcus revealed he had built a bomb from the needles. Marcus yelled for the guards to help Wilson.

When the guards entered the room, they saw him hiding and told him the mattress wouldn't stop him from being hurt by them. Marcus replied it wasn't them he was hiding from. On the ground, they spotted the bomb set to go off. The bomb exploded, maiming the two guards. Marcus toke one of the guards guns and fired two shots in each of the guard's heads.

Down the hall, Mrs. Rank yelled for her officers to get in there as they couldn't call the police due to the illegal activities. Marcus then entered the room and knocked her unconscious. He chained her up with handcuffs to a heating pipe and told her his plan. He unlocked all the cell doors for the kids to exact their revenge. His plan was to free the children from their captors and allow them their revenge.

The next day, to Marcus's surprise, he read the newspaper stating a riot had occurred and everyone had been murdered. The building had burned down and everything was blamed on Marcus.

Upon hearing the story, Saya hugs Marcus and apologizes for all he's been through. Maria suddenly appears catching the two embracing. Saya tells her it was nothing and that Marcus was just worried about finding the man who took Chico's body.[1] To which she replies she has already found the man. Marcus and Saya both hold onto the journal without Maria seeing their connection.

Retrieved from "https://imagecomics.fandom.com/wiki/Deadly_Class_Vol_1_8?oldid=43738"
Community content is available under CC-BY-SA unless otherwise noted.