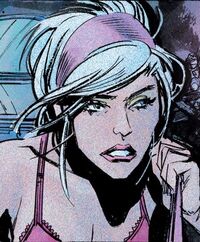 Debbie tried to hold him together. Holding on to the tech-head she loved. She ended up in the exact situation she swore to avoid... she was just like her dad.

Debbie Decay is one of the last women in Los Angeles in the year 2089 to not have artificially augmented her body.[1]

As a young girl, Debbie watched her mother live her life, "jacked in" to TV and engrossed in technology. Her mother didn't want anything to do with her as it was a distraction from her TV. Her father was a police officer, and one of the last generation of LAPD officers before they were shut down for private enforcers. Her father encouraged her to avoid technology and play outside to experience real life. Debbie knew the last thing she wanted was to end up like her father - attempting to pull someone from a technological addiction.[2]

Debbie spent years nursing her discharged cop-of-a-father. He became engrossed in the Nanopac entertainment and became a vegetable.[1]

After he died, she became bored. She found a young boy named Teddy Dennis, and pulled him from his Nanopacs. Together, the two grew up without technology, and fell in love. One day, they were attacked by a group of ruffians who were filming a reality show of beating people up and broadcasting it on the internet. Teddy wasn't strong enough to protect her and was beaten down while they filmed him. Debbie was taught fighting skills by her father and beat back the four boys, embarrassing Teddy on television - television that everyone he knew was watching.[2]

Due to the guilt of being too weak to protect his girl, Teddy joined the constable program and became Led Dent, one of the cities most notorious and strongest constable police force. As a result, he became jacked-in to the technology they had attempted to avoid their whole lives. Debbie realized she became exactly what she swore not to become, someone who was attempting to free a loved one from technology.[2]

Debbie, along with her boyfriend Led Dent, tracked down Ralphie, a low-level thug, to give him the shake down. They wanted his boss, Davey Trauma. Davey had killed thousands of people recently and they were seeking justice as constables. Upon finding him, they found themselves in a chase where upon knocking him out, she realized her boyfriend was approaching a state like her father where he was too addicted with technology. She planned to use the money from the last bounty to move them to Japan where people still live without being jacked-in to technology.[1]

She headed to Flak Tower, where they met with Flak. When he starts to tell them of their next mission in Tokyo, she realized he knew all along she planned on escaping. He told them their last task was to find the ruler of Japan, kill them, and bring down the EMP system protecting it as they were full of supplies and materials the world needed.[2]

Debbie and Led headed to Japan, where they spent 9 days detoxing Led from his technology addiction. Upon arriving, a samurai spotted them and Led chased him. However, he was not fast enough as the samurai jumped a ravine that Led could not follow. Debbie came to the rescue and scaled over the gap to tackle the man. However, she stood up after the fall only to realize she stood face to face with a woman samurai and horde of Japanese warrior ready to attack her.[2] Debbie picked herself up off the ground. She stumbled on her words as she stood before Kazumi, a beautiful and powerful woman. Debbie attempted to lie about arriving alone. Kazumi informed her she already knew she was lying as Led Dent fell down ruining his hiding spot. Kazumi told them there was no place for lies in her new anti-technology world of Japan. She explained she was neo-bushido and healed Debbie's wounds. They met Mash, who initially gave them a hard time. He revealed he was kidding as he skulked away in the shadows and cursed Led and vowed revenge.[3]

Later that night, Led proposed to Debbie.[3] After they made love, Mash surprise attacked the duo with his gang of thieves. Mash wanted revenge as Led had attacked his brother years ago. However, he then revealed that when Led was a teenager and was beaten and filmed, Mash and his brother were the perpetrators. Led defeated Mash and was critically injured in the process. Kazumi arrived and attempted to heal Led, however, she was stabbed in the back by Mash as Debbie watched in horror. Debbie and Led attempted to fight off Mash and eventually Led smashed Mash's head in with a stone. When Kazumi's men arrived, they mistakenly thought Led had harmed Kazumi. Led broke off from Debbie to flee the men.[4]

Debbie tended to Kazumi as she was brought back to the village and was dying. In her final breaths, Kazumi gave Debbie her sword and told her the EMP was actually within her body. She had spent years researching a serum that would allow her to control plants and animals. Rather than use it as a weapon, she injected herself with the serum and realized she could keep technology out of Japan. Since she was dying, she needed to pass the gift onto Debbie as she had proven strong enough to maintain the EMP. As Debbie walked away, Led Dent returned, except fully jacked into technology again. He was under control of Davey Trauma and ordered to set off a bomb to blow up the town and lower the EMP. She took Takara, Kazumi's son, and hid him in a cellar as she injected herself with the serum to become an EMP to stop the invaders. However, the bomb went off at the same time.[5]

Retrieved from "https://imagecomics.fandom.com/wiki/Debbie_Decay_(Tokyo_Ghost)?oldid=54859"
Community content is available under CC-BY-SA unless otherwise noted.