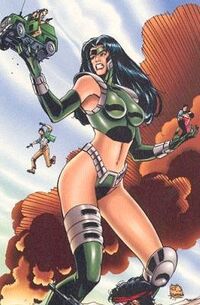 Masada is a Jewish superhero and member of Team Youngblood.

An Israeli crimefighter, she has the power to increase her size and become a giantess. She claims the source of her powers is the souls of the Jewish warriors who died at Masada (hence her name) as well as all those who gave their lives in the name of Judaism. A troubled young woman, Masada is sometimes emotionally overwhelmed by the voices of the spirits that echo within her. When she faced former Youngblood member Psi-Fire he attempted to access her mind and the souls overwhelmed their foe and placed Psi-Fire in a coma.