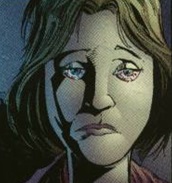 Dee Afflek knew her husband was involved in something deep. She helped moved his evidence folder to Grand Central Station when he was murdered by Trenchcoat Men. She told Sam Burke everything at orders of the trenchcoat men and gave Sam the key to the locker in GCS. When she returned to her home to inform the trenchcoat men she had completed her orders, she was then murdered by them.[1]

Retrieved from "https://imagecomics.fandom.com/wiki/Dee_Afflek?oldid=33494"
Community content is available under CC-BY-SA unless otherwise noted.