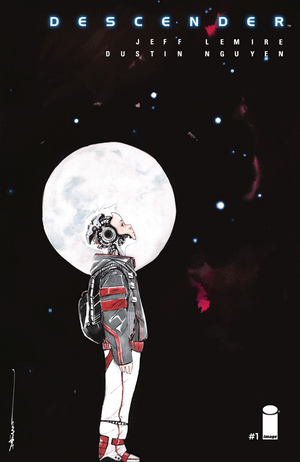 The residents of Niyrata go about their day when something shocks them. A sudden tremor causes them all to witness something horrible in the sky.

Dr. Jin Quon receives a wake up call from Dr. Nagoki. He rushes to Central Comm to find a gigantic robot looming over Niyrata. He tells Quon that eight more robots have appeared and stand over the other eight major cities of Niyrata. Its eyes suddenly light up and prepare to fire some form of an energy attack.

10 years later at the Dirishu mining colony. Tim-21 wakes up and discoveres he is alone. The bodies of humans and robots are strewn across the facility. The computer informs him the colony was hit with a deadly gas and everyone had perished. He finds his assistant droid Bandit and fixes his communication circuit. Together, they head to the Comm room to discover what happened. Tim witnesses a broadcast of the nine Harvesters attacking planets across the Magacosm. He also learns that the humans retaliated in return and began a robot culling.

3 days later on Niyrata, Captain Telsa wakes up Dr. Quon. She has him re-explain the codex theory. Moments before the attack, Quon explains he was able to gather large amounts of data. He proclaimed the machines were too advanced to decipher, but in the same way humans are made of DNA, machines have a core base language. Telsa informed him the codex had been cracked. She tells him they are related to the Tim bots he invented 15 years ago. Quon is shocked as those were merely companion bots. They strap into a jet. Telsa informs him one Tim bot has recently connected to UGC computers and they're on their way to check it out.

Meanwhile on Dirishu's moon, Tim spots a ship landing to respond to his distress signal. A group of Scrappers with guns emerge from the ship.

Retrieved from "https://imagecomics.fandom.com/wiki/Descender_Vol_1_1?oldid=68235"
Community content is available under CC-BY-SA unless otherwise noted.