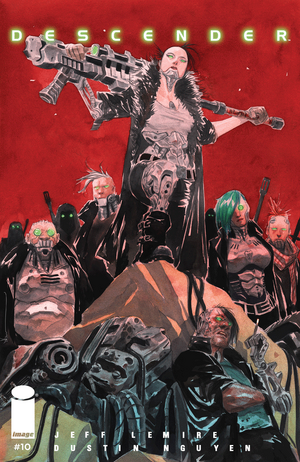 On the Machine Moon, Psius welcomes them to the home planet of the robots. Telsa is defensive and wants to leave. Psius warns them they can't just let them leave, though they are not jailers and are free to leave. Tim-21 speaks up and tells him he wants to find Andy Tavers. Psius assures him that he will help him find Andy, but first he wants to hear more about the dreams Tim has been having. He wants to run tests on him. Jin Quon asks what kind of tests and Psius tells him that he believes Tim's dreams are real.

Psius then tells him a story of a 'robot heaven', a place where robots go when they die. Quon believes it's a farce, but agrees to let them run their tests if he can watch. Telsa makes a quip that his supervision may not impress them. Psius tells them it's time for them to go to their rooms. Tim-22 asks Tim-21 if he'd like to go to his room and play games with him.

Meanwhile on Sampson, Andy Tavers and Blugger Vance continue to lead Bandit to see Andy's ex with the plan of reversing his tracking beacon to find Tim-21. Driller and Tullis are carted along as well, which Blugger questions. Andy reminds him that killing a UGC officer would get both of their licenses revoked. He reminds him that Bandit had a fit when they tried to get rid of Driller. However, they're suddenly interrupted by a gang of cyborgs who announce themselves as the Between. Andy talks to the leader and calls her Effie while the rest of the crew realize that she is his ex. They decide to head indoors to talk things over.

Elsewhere, Tim-22 plays a violent game with Tim-21. Tim-21 asks to stop as he's used to just reading books. 21 pulls out an actual physical book and 22 is surprised as he feels like they're fake with him being used to reading hologram books.

Telsa approaches Quon when he's alone. Quon tells him the place they are in is a glass sculpture hall. She tries to get down to business and tell him they're in a war. He would do well not to forget they are behind enemy lines. She's worried they'll kill them soon as they are no longer needed. Quon tells her to relax and that she's paranoid.

On Niyrata, General Nagoki is approached by an underling who warns him about King S'Lok being appointed. Nagoki reminds the underling that Tullis will protect his headstrong daughter. He then heads in to meet with the UGC council. Upon entering, Ambassador Telema warns them of a vision the Phages have seen. He calls in children who agree to show them how the Harvesters will return and they are being led by Tim-21.

As TIM-21 dives deeper into the mysteries of the Machine Moon—the amazing artificial world of the robot resistance—Andy, Driller, and Bandit come face to face with a startling new group called the Between.

Retrieved from "https://imagecomics.fandom.com/wiki/Descender_Vol_1_10?oldid=55443"
Community content is available under CC-BY-SA unless otherwise noted.