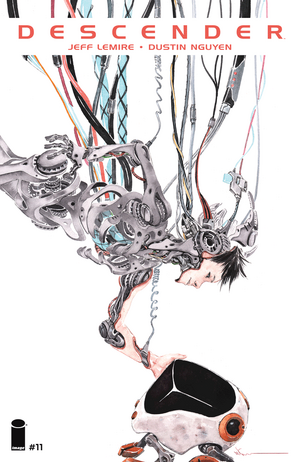 Psius has Tim-21's memory scanned to understand if his dreams and an afterlife for robots might exist. Tim-22 becomes impatient and asks if they are done yet. Psius tells him he'll be punished if he can't behave. Jin Quon tells him that he rebuilt a lot of the 'human' qualities of the Tim series. Sure, the base codex was stolen but there was still a ton of research into what they added to the Tim series. Tim-22 asks if he can take Tim-21 to the inner core as he thinks Tim-21 will enjoy it. Telsa is resistant as she says he's not going anywhere without him, however, Tim-21 heads off with 22 as the humans stay in quarantine, or as Telsa refers to it as 'jail'.

Meanwhile on Sampson, Andy Tavers and Effie have a brief spat about how Andy began to kill robots. They're suddenly attacked by ships and Andy realizes they were tracked by Gnishians. They quickly agree to rush to a nearby cave.

On the moon, Telsa becomes increasingly more distrustful of the robots. She leads Quon on a wild goose chase and smashes a control to enter a hidden room. They are both shocked to find a gigantic Harvester in storage. At the same time, Psius walks in and tells them they shouldn't have gone snooping around. While the humans call them Harvesters, he tells them they call them Gods.

Tim-21 and Tim-22 enter the core. 22 shows him the core where they're building a robot army. He then tells him he gets jealous and shoves him into the abyss.

TIM-21 discovers the secret at the heart of the Robot Resistance and it will change the course of his quest forever.

Retrieved from "https://imagecomics.fandom.com/wiki/Descender_Vol_1_11?oldid=68250"
Community content is available under CC-BY-SA unless otherwise noted.