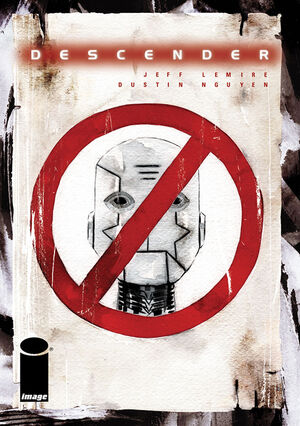 Tim-21 recalls being created by Dr. Jin Quon. He was a class-A companion drone meant to assist, aid, and protect his assigned human. He remembers asking Dr. Quon if he was his father. Quon laughed and reminded him he wasn't truly alive. He recalls arriving on the colony and meeting his new Tavers family.

Over the next year, he grew close and protected the family. He became accepted and was even thrown a birthday party.

In the present, Tim takes off running to the mines. The scrapers give chase and fire their guns. As Bandit is attacked by a mutant dog, Tim uses his hand cannon to blast his attacker off of him. They duck into the mines where Tim stumbled upon the corpse of his mother.

The Scrappers corner Tim. His plasma canon recharges and he takes out their leader. In retaliation they blow a hole through him. They discuss his processor fetching them a pretty penny. A nearby driller robot suddenly awakens and attacks the humans and defends the incapacitated Tim.

Retrieved from "https://imagecomics.fandom.com/wiki/Descender_Vol_1_2?oldid=68243"
Community content is available under CC-BY-SA unless otherwise noted.