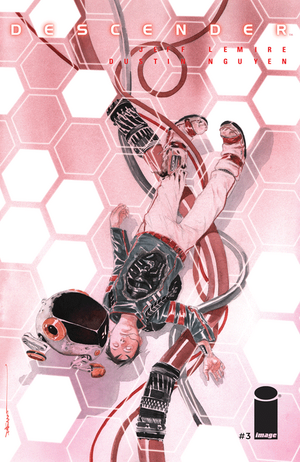 Tim-21 has a dream about meeting Eraz-435, a droid that was harvested and begs for his help and companionship. Tim begins to automatically download backups of his memory as his body starts to fail him from the damage sustained.[1]

Meanwhile in reality, Driller rushes Tim to a medical bay. He attempts to operate the machinery to save Tim but is not programmed to be able to figure out the advanced technology.

Dr. Jin Quon, Captain Telsa, and Tullis arrive on the move and receive sensor readouts that another ship has already landed. They arm themselves and head out to investigate. Driller senses their presence and moves to attack them. Tullis uses an EMP burster to disable the large droid. They find Tim and relocate him back to the ship for more advanced technology to save him.

Tim wakes up and recognizes Quon. Tells him he was having a dream and Quon feels that's impossible for a bot to dream.

Retrieved from "https://imagecomics.fandom.com/wiki/Descender_Vol_1_3?oldid=38480"
Community content is available under CC-BY-SA unless otherwise noted.