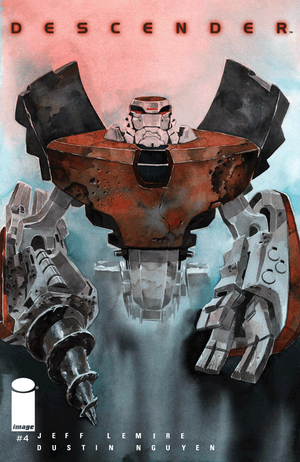 Tim-21 continues to tell Dr. Jin Quon and Captain Telsa about his dream which befuddles them. He explains he was asleep for the last ten years and his family has passed away during his time asleep. As they talk, Tim tells them he realizes they aren't true family, but it still feels right and it's what he was programmed for.

In the bay, Tullis and Driller are in a standoff. Tim rushes in and orders Driller to stand down and protect these humans as they are good. Telsa orders Tullis to plot a return flight for him.

Later, Telsa takes a private call from General Nagoki, her dad. They talk about no way the Scrappers could have legitimately intercepted the transmission so there must be a leak in the UGC council. Quon walks into her room as she hangs up the call. She tells him she was talking with her dad and Quon challenges her asking if this mission was classified. She tries to cover her tracks and say it is admits that her father is actually General Nagoki. Quon asks if she truly is going to follow up on finding his family per her promise to him. She replies that two ships had attempted to escape but malfunctioned and they surely must have perished. Quon asks if she plans on tell him and she says she won't just yet.

A sudden distress signal goes off an Tullis summons them to the bridge. They find they are about to be boarded by more Scrappers. They arm themselves with weapons and head to the cargo bay where the bots are located.

Scrappers enter the bay and fire a magnet into the room pushing guns and robots to be the walls. When Telsa and Tullis arrive, they realize they can't enter the room without the magnet disabling their weapons. The Scrappers tell them they're all going to the pits on Gnish so they need to surrender.

Retrieved from "https://imagecomics.fandom.com/wiki/Descender_Vol_1_4?oldid=38481"
Community content is available under CC-BY-SA unless otherwise noted.