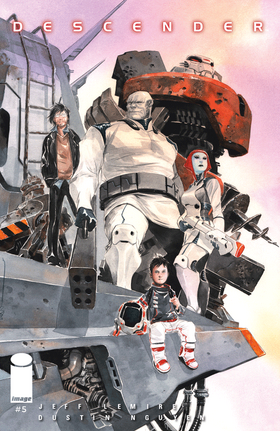 On Gnish, the crew are presented to King S'Nok III. He sends Tullis, Bandit, and Driller to the melting pits to fight. He tells his men to take the rest to his lab so that they me be dissected.

On Niyrata, General Nagoki meets with the council to discuss their defense plans. He's pressed into admitting he's found a Tim series robot. They council is at first confused what knowing the codex could potentially do, then they realize Nagoki is secretly planning on building his own Harvester robots. Nagoki excuses himself for his next meeting.

As he heads to his next spot, a UGC member approaches him and tells him his daughter has been taken captive by Scrappers to Gnish. A nearby person steps out to make a secret secure transmission. She reports in as 10-R34 and that the target is located on Gnish. She announces long-live the Hardwire and de-constructs herself as a robot while a gas emits from her fallen body.

Meanwhile on Gnish, Driller and Tullis prepare to be thrown into the pits. Driller leads the charge in their defense as Tullis rides his back to retrieve a gun from an enemy droid.

Elsewhere, King S'Nok has Quon strapped up to a chair. Tim is shocked it wasn't him on the interrogation chair. S'Nok explains they plan on torturing him, but they want the secrets of the Harvesters from Quon. They cut off Quon's arm as he screams that he knows nothing. They prepare to cut off his other arm when he pleads that he's a complete fraud. He doesn't know anything about machines and he stole all his research.