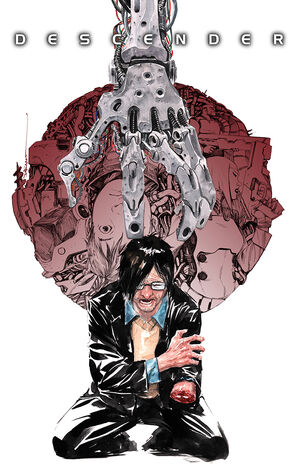 I am Psius and we are the Hardwire--The underground robot resistence. We have come for Tim-21.

Fifteen years ago on Ostrakon, Doctor Solomon and his apprentice, Jin Quon met with Doctor Deschang in the middle of the dessert. They were summoned to research the treasures discovered deep beneath the surface in ancient ruins. Dechang tells them he is an archeologist but their find is right up their alley. They find a disabled robot sitting atop an alter. They are shocked as the people living in the ruins were primitive and lived millions of years old. The implications of a race so civilized to have developed advanced robotics and to be wiped out are unfathomable to them. They relocate the robot back to their ship.

Inside the ship, they discover they computer and electronics are in a shape they could potentially reactivate it. Upon activating it and running a translation program, the robot warns them that they've brought the disaster upon themselves. It access the network and realizes much time has passed since it was deactivated. It suddenly grows concerned and again and blurts out they've brought ruin upon themselves once more. It tells them it is an emissary. Solomon grows concerned and immediately shuts off the robot. He tells Quon to pack up the parts and prepare it to be shipped and sealed, they couldn't risk keeping it activated. Quon protests that they were just getting the information they needed. Solomon rebukes him and tells him he's in charge. That night, Quon betrayed his mentor believing his cause justified the means.

In the present, King S'Nok III and Captain Telsa are disgusted with the lie Quon has built his life on. S'nok orders his men to dispose of him and Tim-21.

Suddenly, a group of Hardwire resistance burst into the room to free Tim-21. They have a Tim-22 robot with them and inform them they've traveled a far distance to find him.

Retrieved from "https://imagecomics.fandom.com/wiki/Descender_Vol_1_6?oldid=48502"
Community content is available under CC-BY-SA unless otherwise noted.