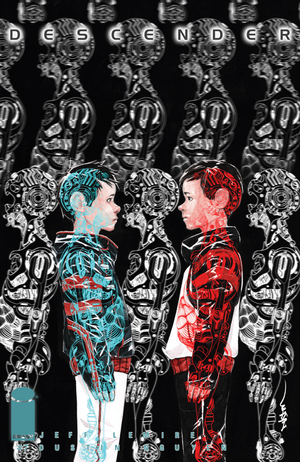 A man arrives on Hepton, a world devastated by the Harvesters with a lack of climate control since the machines were destroyed. The man approached the locals and demands them to reveal their secrets. They proclaim ignorance but he points out they have no irrigation system or automated controls to keep their crops alive. He demands to see their robots. They hang their head realizing that they've been figured out and point him to a basement where he spots several rogue robots. The robots plead that there are children on the commune and to please let them stay as they mean no harm. The man dismantles the robots and drags them out.

Meanwhile on Gnish, the Hardwire offer Tim-21 a chance to escape with them. King S'Nok III is furious that they infiltrated his security and can't believe that form of technology is available. Psius orders Tim-22 to kill the king as a form of political assassination to further the Hardwire's goals. Tim-22 uses a hand pulsar blast to blow the king's head off. When the Gnishians hear the disturbance and realize their king has been murdered, they open fire on the crew as the Hardwire escape, barking orders to protect Tim-21 at all costs.

The crew comes under fire. Captain Telsa demands that Tim-21 is under the UGC protection. Jin Quon pleads with her they must leave with the Hardwire, or they'll never survive. Psius corrects them and tells them that carbon based lifeforms are not welcome on his planet. Tim-21 tells them he refuses to go with them unless Telsa and Quon can come as well. Psius gives in to his demands and allows them to escape with them. However, he callously tells them he can't save Bandit or Driller from the fighting pits. Tim-21 has an emotional outburst as Tim-22 remains emotionally unconnected.

Meanwhile on the outer rim of the Osler System on a Scrap-Sat, where scrappers get their missions, the man from Hepton asks for a new assignment. The Gnishian is surprised he wants more missions as he should be able to retire now with all the runs he's completed. When the Gnishian rambles through missions, Andy is suddenly shocked to hear about one on a Dirishu-6 Moon. He demands the details on that mission even though it was already picked up, but not yet complete. He tells the person filling up his ship that he's taking off immediately and doesn't care that he's paid for a full tank and is only half-full. He urgently needs to leave.

The man arrives on Dirishu-6. He finds Blugger Vance who introduces himself and asks him to take him with him. The man refuses at first. When Vance reveals he put a tracking device on the droid that was there earlier. The man tells him his name is Andy, and that the droid they are tracking is his brother.

The bestselling breakout hit series continues as its exciting second arc begins. It's the perfect jumping on point for new readers! TIM-21's adventure continues as a mysterious figure from his past emerges and sends shockwaves through the galaxy.[1]

NEW STORY ARC. The bestselling breakout hit series continues as its exciting second arc begins. It's the perfect jumping on point for new readers! TIM-21's adventure continues as a mysterious figure from his past emerges and sends shockwaves through the galaxy. COVER B is a 3-D photo cover.

Retrieved from "https://imagecomics.fandom.com/wiki/Descender_Vol_1_7?oldid=52723"
Community content is available under CC-BY-SA unless otherwise noted.