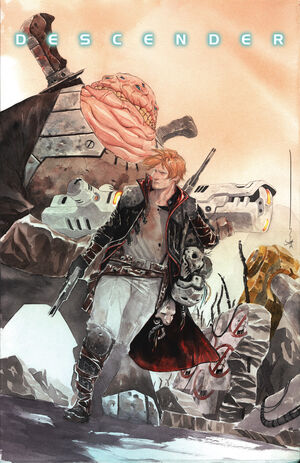 I'm thinking it's going to take more than two UGC fighters to stop the Space Dagger. You in?

When Andy Tavers was a small boy growing up on Dirishu-6 Moon, he frequently would avoid contact with children his age. Instead of heading to designated spots where he would be taken care of, he sneaked away to be by himself at home. He saw a Robot at the store one day and bugged his mom until she purchased it for them, despite being short on money. Andy and Tim-21 became close friends, despite Tim-21 not reciprocating emotions the same way a human does. When the Harvesters attacked, Andy's mom put him on a ship without Tim and ran back to the mines in a sacrificial move to save others in the colony.

In the present, Andy Tavers and Blugger Vance travel in their spaceship, bickering. When they are approached by two Gnishian Warships, they are ordered to stand down. Everyone is on high alert since the assassination of King S'Nok III .[1] Blugger and Andy make their move and attack. When a whole squadron arrives, they make a break for it and head to Phage where they know the ships won't follow.

While passing through Phage, they see a shimmering city and Phages. One passes through Andy and Andy has visions he doesn't want to speak about. They clear the Phage space and Blugger asks what he saw. Andy doesn't want to talk about it and tells him he just wants to find his robot.

Bestselling creators JEFF LEMIRE and DUSTIN NGUYEN launch their sci-fi epic into bold new territory. TIM-21 and his companions are taken to the mind bending home world of the Robot resistance while a long lost figure from Tim's past emerges, but will he be friend or foe?[2]

Retrieved from "https://imagecomics.fandom.com/wiki/Descender_Vol_1_8?oldid=52722"
Community content is available under CC-BY-SA unless otherwise noted.