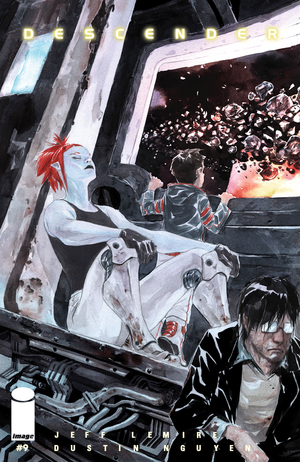 But our empathy is what makes us so special, Tim-21. Is is why the TIM series was created in the first place.

Jin Quon, Telsa, and Tim-21 continue their journey to the robot homeworld aboard the Hardwire spaceship. Jin has his arm cybernetically replaced after it was cut off by the Gnishians. He exchanges a heated set of words with Telsa about Tim-21's emotional settings as Tim drones about Driller and Bandit.

Tim-21 steps out and Tim-22 follows him out. Tim-22 asks what it was like to have a companion bot as he never had one before. He empathizes and asks if Tim-22 ever wishes he didn't feel emotions like a human. Tim-22 reminds him that it is their empathy which makes them unique. He laughs that humans would discard the old if they could. Tim-22 then changes his hair color to a red to differentiate himself from Tim-21.

On the planet Gnish, the prince S'Lok is named king of Gnish. In the audience, Andy Tavers and Blugger Vance watch and are disgusted. They have arrived following Tim-21's tracking unit but the ship sits on the planet with no Tim-21 as they had already left.

Elsewhere in a combat arena, Driller, Bandit, and Tullis fight for their lives in a fight arena. Driller uses his drills to save them from the onslaught of robot attackers.

Later after the battle, Andy approaches them in their holding cells. He spots Tullis, a U.G.C. soldier, in the cells with a companion bot. When Tullis realizes he may be THE Andy that owned Tim-21, Andy agrees to free them. He tells Blugger that Tim-21 and the companion bot are linked via a chip so that the companion bot could always find him. They could reverse the signal and use it to track Tim-21 down. Andy tells Blugger they could contact his ex-wife who knows how to do that sort of technical activity.

In the ship, Telsa proposes they may need to go with plan B, if they have to escape they could take Tim-22 as they only need one of their codecs. Jin is shocked that she'd betray a friend like that. Tim-21 and Tim-22 return as they enter the robot homeworld in a giant asteroid field.

TIM-21, TELSA and QUON arrive at the amazing hidden home world of The Robot Resistance. But with this be a haven or a prison for Tim and his companions? And what new secrets lie at the centre of the Machine Moon?

Retrieved from "https://imagecomics.fandom.com/wiki/Descender_Vol_1_9?oldid=54442"
Community content is available under CC-BY-SA unless otherwise noted.