Start a Wiki
The Specter of Death 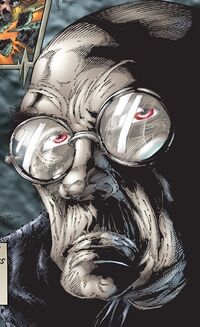 Deurges is an eternal specter of death. He was seen before the deaths of all of Angela's mortal souls before they died.[1]

When Cogliostro ran into him in Rat City he became horrified to see him walking free. Deurges easily beat him and told him he was no longer his jailor.[2] He was then teleported to Limbo with Angela where he released the ex-angel Lilith. While the two were distracted in battle, he attempted to take her Elysian-Lock which contained the time of all Angels. Angela interceded and smashed it to undo time and save the universe from the singularity.[3]

Retrieved from "https://imagecomics.fandom.com/wiki/Deurges?oldid=31504"
Community content is available under CC-BY-SA unless otherwise noted.