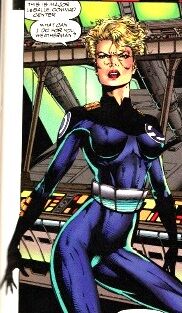 Diane LaSalle is a former SkyWatch officer. She was among the ranking officers on the SkyWatch staff during her time.

Major LaSalle was assigned the duty of maintaining the security of the Warguard in their cryogenic containment cells aboard SkyWatch[1]. It was an assignment she achieved with the help of her then-boyfriend Colonel Marc Slayton aka Backlash. The two maintained a balanced relationship for the most part, not letting their work duties clash with their love life until an alien invasion of Daemonites aboard SkyWatch changed everything. During the incident, LaSalle was possessed by the Daemonite S'Ryn, who initiated the release of the Warguard so his alien comrades could use them as host bodies[2]. StormWatch teams One and Two managed to neutralize the threat despite losing Backlash in outer space when S'Ryn/LaSalle depressurized the deck they were all fighting on [3] to allow time to hijack a SkyWatch shuttle. Backlash survived being in the vacuum of space long enough to board the shuttle and delay S'Ryn's escape plans. S'Ryn had planned to destroy SkyWatch using the shuttle's advanced arsenal. Backlash used his Psionic whip to separate S'Ryn from LaSalle's body, in time to stop him from firing on SkyWatch. This resulted in LaSalle being left in a coma.

Shortly after, Backlash announced his intent to leave StormWatch only to his friend and former training student Battalion, to pursue those responsible for LaSalle's condition[4]. After a long, storied quest, Backlash would see Diane recover from her coma[5]. He confessed his one night stand with Amanda Reed aka Taboo and promptly Diane ended her relationship with him[6].

Diane is shot and killed by Le Gauche when she tries to stop him from getting away with a sample of Marc's Gen-Factor.[7]

Retrieved from "https://imagecomics.fandom.com/wiki/Diane_LaSalle?oldid=71144"
Community content is available under CC-BY-SA unless otherwise noted.