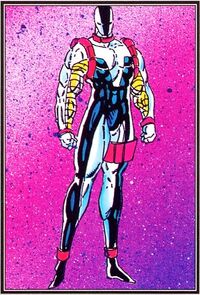 Diehard is a comic book superhero from the Image Comics series Youngblood.

Diehard was chosen in the 40's to be the first of the USA genetic experiments, and believed to be the first successful fusion of man and machine. Diehard was a hero in World War II, fighting alongside heroes like Glory and Superpatriot.

Diehard was part of the original Youngblood program. When their leader Battlestone punched a soldier so hard that he killed him, Diehard became enraged and punched Battlestone while relieving him of command. Diehard remained with Youngblood under Shaft's leadership. He began a relationship with teammate Vogue.

While Diehard was away leading a mission against Cybernet (which resulted in the apparent death of Combat), a totally robotic Diehard was created to replace the original one, an idea that Shaft disliked.

During Knightsabre's trial for the death of Riptide, Diehard reunited with his former WWII teammates the Allies, who were attending the trial. After Sentinel was found as the real culprit, Youngblood was disassembled and Diehard joined the re-formed Allies.

Some time later, Diehard joined a new version of Youngblood and after it disbandment he became the president of the USA.