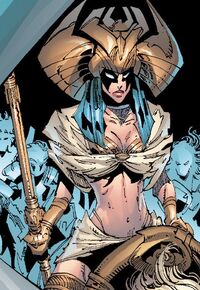 Domina approached Urania and asked her to invade earth against high Council's commands. She felt Urizen could not be allowed to roam free on earth and they should stop him.[1] When Angela appeared to stop her from touching down on earth, she lead the attack against Angela. Domina ultimately stood down when the Heavenly Hosts appeared and reiterated their commands to stop.[2]

Retrieved from "https://imagecomics.fandom.com/wiki/Domina?oldid=64969"
Community content is available under CC-BY-SA unless otherwise noted.