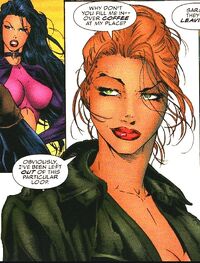 Beaner was first seen in Issue #10 of the first and only volume of Strykeforce series. She requested a meeting with Stryker to review his financial situation which she emphasized was on the verge of bankruptcy. She provided Stryker with a couple of job requests: one came from a US Senator and the other was from a chemical company. While Stryker and his team (divided into two smaller forces to take on both jobs) were away, Beaner was "kidnapped" by the villainous robotic engineer Dr. Brainard. Via a video communique, Brainard informed Stryker of his plans to inflict irreparable harm on his blonde captive[1]. Dominique however, was at home in Manhattan the whole time, while Strykeforce put on a valiant effort to rescue her from Brainard. While at home, Beaner watched a live news coverage of Black Anvil, Tempest and Killrazor being cornered by police in the middle of a Manhattan intersection. She quickly acted and intervened on behalf of the three teammates, vouching for their innocents.

Beaner brought the three members of Strykeforce to her apartment for coffee. When they heard of their leader Stryker being seen on a rooftop being carried away by mysterious allies, Killrazor, Anvil and Tempest quickly left to respond. While alone, Beaner was however rendered unconscious and cocooned by the alien princess known as Sh'rrrnn. Using her unique ability to clone an imposter copy of a victim via a DNA sampling, Sh'rrrnn posed as Beaner for a brief time. Beaner was left on a rooftop in Manhattan in her cocoon state[2] before being found and taken to a hospital[3]. Beaner was not seen again after this point. It could be speculated that Stryker broke off all contact with her as he no longer sought to lead Strykeforce anymore, effectively disbanding the [first] team on the belief the whole thing was a mistake.

Retrieved from "https://imagecomics.fandom.com/wiki/Dominique_Beaner_(Top_Cow)?oldid=51784"
Community content is available under CC-BY-SA unless otherwise noted.