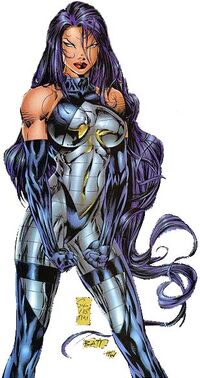 Dominique Thibaut (aka Cyblade) is the name of a member of Cyberforce.

Only fragments of Cyblade's past are known at present. Dominique Thiebaut was born in the European country of Chalenne, somewhere near France. Her great-grandfather, Aubrey II was the last king of Chalenne, and his only child was a daughter, Marie. Marie wed a Col. Jean-Michel Thiebaut, who with Aubrey II’s blessing, became the first Prime Minister of the new democracy of Chalenne. The couple had two children, Alexander, who died of fever at age seven, and Patrick, Dominique’s father. Patrick Thiebaut was less moral than his forebears, and more interested in money and power. He married a shy young woman by the name of Claire, though the marriage was apparently neither happy nor idyllic. She gave birth quickly, to a son whom they named Michel. Two years later, Claire died in childbirth with Dominique Aurore Marie Thiebaut.


In her early years, Dominique was spoiled and pampered. Her mutant powers manifested when she was attacked by armed gunmen at school. Many years later, her father and brother apparently met with violent, tragic ends, which Dominique blames herself for not preventing. At the funeral, a young Killjoy, one of the SHOCS who stayed with Cyberdata after Cyberforce split, is shown smiling over a young Dominique’s shoulder. After their deaths, Dominique left Chalenne, and went freelance through the world. She studied to become a doctor, while simultaneously joining with freedom fighters in the Middle East. Eventually, she grew unhappy with her role as a freedom fighter, and ended both her role in the Middle Eastern conflicts and her studies to become a doctor. She was eventually approached by Cyberdata, joined them, and was transformed into the cyborg Cyblade. She served as a SHOC until Dr. Corben, Heatwave and Stryker left Cyberdata to form Cyberforce. Dr. Corben revealed to her the atrocities she had been committing while under the control of the brain box and Cyberdata, and appalled, she allowed him to remove the device. When Heatwave and Stryker left, she went with them. She maintained her father’s nuance as a highly skilled businesswoman, and amassed a small personal fortune, both before and after her tenure as a SHOC.

In Issue #34, Dominique’s resurrected brother Michel informed her that their father had sold many of the people of Chalenne to Cyberdata, and that the corporation had not granted them with powers, but merely enhanced and activated latent mete-human powers within each of the SHOCS. It was further hinted that the Cyberforce characters were mutants or “meta-humans” in the X-Men/Cyberforce one shot comic, which united the two most glaringly similar characters in the X-Men/Cyberforce universes, namely Wolverine & Ripclaw, and Psylocke & Cyblade. The arc introduces Ripclaw and Cyblade to two Marvel villain staples, being The Hand ninjas and the Sentinels, and takes place in Japan. With the two members of Cyberforce captured by the Sentinels, a wandering Wolverine and Psylocke locate and free the two metahumans, then both teams destroy the Sentinels. With the relaunch of Cyberforce in 2006, Cyblade is again shown in her role as commander, though she steps down for the resurrected Heatwave.