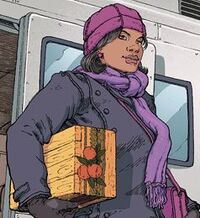 At first, Jack's campaign was going horrible despite Donna's competent strategy. Marlinspike recommended to Jack that they head to Ohio instead of Iowa next. Donna pushed for Iowa but they moved forward with Ohio. Donna witnessed Jack arguing with himself in the bus and heard him call out the name, Marlinspike. She was shocked when they arrived in Ohio and instead of backing down from an assassin, Jack charged forward and stopped him. They found his electability rating dramatically increased after the events.[3]

Later, Donna received a computer video conference call from the mayor of Musk, Lois, who was also Jack's wife. Lois told Donna she knew of her past and her failures and asked her to quit. Donna was unphased and asked if instead Lois come out to stand by Jack as his first lady. However, she was interrupted by a text. She quickly hung up with Lois and interrupted Jack moonlighting with a random woman. She informed him that the results had come in and that Jack had lost to Honeycutt. Jack stormed out of the room as Donna was attempting to figure out what to do next.[2]

Soon, Jack had visions and began to hallucinate. He hadn't seen Marlinspike in some time and was soon going to be pitted against Charlotte Pickens in a presidential debate. He felt unprepared as Donna grilled him and he couldn't remember answers. Before Donna could finish training him, Jack was pulled from the room by his father for a dinner. Donna had a call with Helena who was tracking down information for him. She informed Donna that she found two hits for the name Marlinspike, both related to death-cults. Suddenly, a knock at the door revealed Jack. Jack arrived with a hidden gun with plans to secretly kill Donna to satisfy Marlinspike's sacrificial requirements. However, Donna met with him and told him she'd stand by him even though he miserably at the debate earlier. He was so taken back by someone sticking with him, he decided not to kill her.[4]

Retrieved from "https://imagecomics.fandom.com/wiki/Donna_Forsyth_(Citizen_Jack)?oldid=55898"
Community content is available under CC-BY-SA unless otherwise noted.