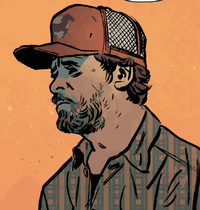 Donnie lived in foster care with Kyle Barnes. Donnie often bullied Kyle, though he stopped at one point and moved out with another family.[1]

At one point, he entered Megan's home and attacked Kyle. He knocked him around enough to wake Megan up who ran into the room and chased Donnie off with a broken lamp. He asked Megan if she felt safe since he had beaten his wife earlier.[2]

At one point, Donnie crossed paths with Kyle Barnes and Mark Holt. The latter brutally beat up Mark and Donnie was told to leave town.[1]

Donnie tried apologizing for his past with Megan but was told he has and will never change.[3]

Retrieved from "https://imagecomics.fandom.com/wiki/Donnie_(Outcast)?oldid=44709"
Community content is available under CC-BY-SA unless otherwise noted.