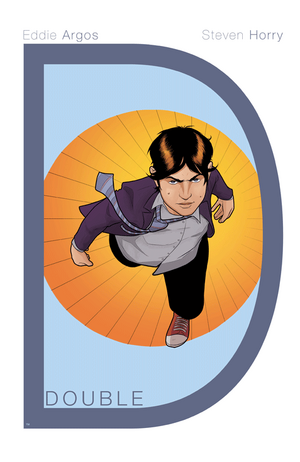 After the official Worst Day Ever, overweight bully magnet Danny Carter discovers he can use his excess body mass to fuel superpowers. Obviously he's going to be a superhero and fight crime, but when you're fifteen years old and you live in the suburbs it's not quite as easy as expected... Written by EDDIE ARGOS, singer and lyricist of critically-acclaimed classic rock band Art Brut, with art by STEVEN HORRY, colors by DAVID COOPER, and lettering by COLIN BELL. To coincide with the release of the graphic novel, Eddie and Steven have—alongside musicians Mark Heffernan and Grant Purser—recorded a soundtrack album, which will be released on Post/Pop Records in late November/early December.

Retrieved from "https://imagecomics.fandom.com/wiki/Double_D_Book_1_OGN?oldid=48208"
Community content is available under CC-BY-SA unless otherwise noted.