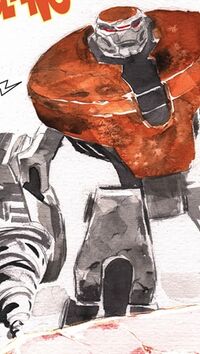 Driller is a Killer

Driller is a gigantic robot that serves as Tim-21's body guard.

When Tim-21 was chased into a mine by Scrappers, Driller woke from his slumber and saved Tim.[1] However, Tim sustained damage in the fight and Driller attempted to rush him to a med bay. However, Driller was too dumb to operate machinery.[2] When Dr. Jin Quon and Captain Telsa arrived to retrieve Tim, they brought Driller along as well. Tim was restored and ordered Driller to not harm them as they were his new family.

However, they were soon captured by the Scrappers and brought to Gnish.[3] He was placed in the Melting Pits where he's fight against other robots in a Colosseum death match.[4]

Andy Tavers and Blugger Vance soon arrived on Gnish. They were tracking a bug planted on Tim-21's ship but found that Tim-21 had already left the planet when they arrived. They stumbled into Tullis and Bandit who were in the holding pits of the fighting arena. When Tullis realized that Andy was THE Andy that used to own Tim-21, they devised a plan to escape and find Tim. Andy realized that Bandit had a chip that was connected to Tim so they could always find each other. He proposed finding his ex-wife who could rig the electronics to find Tim.[5]

Retrieved from "https://imagecomics.fandom.com/wiki/Driller_(Descender)?oldid=62176"
Community content is available under CC-BY-SA unless otherwise noted.