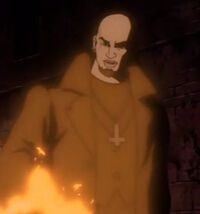 The Drug Reverend showed up to Rat City with several armed henchman to push drugs. They were disrespectful to the local bums and the police had no evidence to stop him from his dealings. When Spawn had seen enough, he stopped the Reverend and handed him back to the bums for eye-for-an-eye retribution.[1]

Retrieved from "https://imagecomics.fandom.com/wiki/Drug_Reverend_(Todd_McFarlane%27s_Spawn)?oldid=31192"
Community content is available under CC-BY-SA unless otherwise noted.