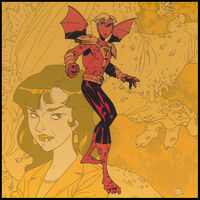 Prior to his birth, Belloc, the King of the Monsters, was on a rampage through an American city when he found a woman named Margaret Rosenblatt. His rampage ended and he took her as his lover. Through their union a son was conceived who is a half human/dragon hybrid that was eventually born and named Duncan Xerxes Absalom Wu Fan Cassius Draco Draconus Quetzelcoatz Gondwana Mjarl Khan Belloc-Rosenblatt. After his birth Duncan and his mother received protection and welfare from a government group that hunts monsters.

As a result of his heritage, Duncan often changed schools and on his first day at Herbert Hoover High School, yet another new school, he found that fitting in was difficult due to his unusual physical appearance. Also fitting in was difficult thanks to a great many obstacles to this goal, particularly his new principal and a bully named Troy Evans. Luckily, Duncan does make a few friends around the school, some from the other outcasts and in particular, a girl named Jenna.

At his father's, Duncan goes through rough training for the weekend. Belloc is training him not only to be powerful, but he wants Duncan to learn things the hard way. Duncan goes back to school where he has a principal that doesn't want him there and a jerk that won't get off his case. So for a little payback, Troy tries to set Duncan up by hiding a gun. It works, but the reaction is far more than what Troy wanted. This leads to Duncan seriously thinking about his control over his emotions and if he truly belongs in the world with humans. When he returns home, it is demolished and Margaret is missing. He tracks down his mother and her kidnapper, a monster from Monster Island. He and the monster have a brutal fight which ends (at least as far as Duncan is concerned) with Duncan blasting the monster with flame, leaving the monster badly burned but alive. This changes when Belloc arrives on the scene and impales the monster with his tail. Duncan figures out that Belloc arranged the kidnapping to test him and threatens to kill him if he ever endangers his mother again. After Duncan flies away, Belloc smiles to himself, saying, "That's my boy".

Duncan’s class is taken abroad by "Mr. M" the Spanish teacher, who shows them the sights of London, before making their way to Spain. While in London, the group hears the story of "The Iron Saint", a long forgotten being that was created to fight, and survive, the King of the Monsters. The suit of armor has been passed down for generations and generations, and now it’s just a museum piece. Duncan learns of its history, and its connection to him, and can’t help but be curious. When he and his friend investigate, they find that the suit has been brought back to life and it’s out to get Duncan. The wearer of the armor turns out to be Mr. M, who is revealed to be not only an S.O.S. escort but a survivor of an attack on a Cuban village. He attempts to use the armor to kill Duncan as revenge. However, Duncan is saved due to his half-human heritage, since the armor cannot draw human blood or else it will be destroyed, and kill humanity, and all life on earth.

For a time Duncan would make friends with other super humans Shadowhawk, Invincible and Zephyr Noble,  these individuals would come together to form the Pact in order to fight his Belloc who was going to see him  on Father's Day.

Retrieved from "https://imagecomics.fandom.com/wiki/Duncan_Belloc-Rosenblatt?oldid=67329"
Community content is available under CC-BY-SA unless otherwise noted.