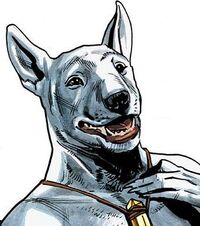 Dunstan Dourlainson, or commonly known as Dusty is the narrator and one of the main characters of the Autumnlands series. He was the son of a trade-master and also a wizard in training. Throughout his life Dusty was schooled by his father of the position of being a member of the Seventeen Cities. He was taught that the wizards were the chosen of the gods and that it was the place of the lesser ones to serve them. Dusty was brought on one trade-mission to the surface where he witnessed his father use his magic to demonstrate his authority over the bison chief, Seven-Scars.

A day before the Pattern of Leng was activated, he met and befriended Enna who arrived with her father Sandorst. After his trip to the Plains, Dusty joined his friends to watch the conclave of wizards perform the Pattern of Leng to call forth the Great Champion.

Dusty witnessed the spell drain the magic supporting the city. He survived the fall, but his home city was destroyed and much to his grief discovered his father had too perished in the crash. [1]

His friends and Enna comforted him and together they worked with the survivors in scavenging for tools and supplies and seek out other survivors trapped in the debris.

Later after it was discovered that Gharta was indeed successful in bringing something from beyond the veils of time, Dusty and his surviving friends gathered together around a small fire and began to tell the story of the Great Champion, however they all argued on the identity of the hero, unable to agree on what tribe the Great Champion was from, as each group claimed he hailed from their respective tribe. Dusty calmed their voices of disappointment stating anything is possible and that the gentlebeings may soon have their answer.

Just as the wizards had collected enough magic to send out a message spell to the nearest city, Seven-Scars and his warriors attacked the weakened city-dwellers. Enna urged Dusty to seek refuge behind the ruin walls of Keneil, however he was shocked to see the savage hatred displayed by the bison, as he was taught by his father that the tribes knew their place and respected the wizards, but now sees it was a lie.

In their place of safety, the two youngsters could only watch the slaughter. However the eerie crystal ball containing the entity broke, releasing a strange naked tattooed creature unlike anything they had seen. [2]

After the mysterious creature had rested and received clean clothes, he called himself Steven T. Learoyd, however still groggy from his ordeal, he refused to accept that was awake, believing he was hallucinating and that the gentlebeings were all figments of a dream. Dusty disappointed at the lack of character and appearance he had originally expected from the Great Champion, continued with his friends to seek out any magical artifacts that survived the fall.

Dusty and his friend witnessed Goodfoot, musing to heslef of stealing the riches of the downed city. Though his friend wanted to tell Sandorst, Dusty suggested against it. When he attempted to tell Gharta, she interrupted him as she was busy trying to create a defensive strategy.[3]

Retrieved from "https://imagecomics.fandom.com/wiki/Dunstan_Dourlainson_(The_Autumnlands)?oldid=57447"
Community content is available under CC-BY-SA unless otherwise noted.