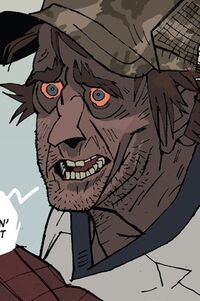 Dusty Tutwiler knew Earl Tubb when they were both younger. His sister dated Earl and he watched every game Earl played.[1]

20 years later, Dusty was accused of stealing money from Coach Boss. He desperately wanted to talk to him about it. He went to the local diner to find Coach Boss but was surprised to see Earl. When he went into the back to meet with Boss, he was attacked by one of Boss' henchmen, Esaw Goings. Earl heard the noise disturbance and rushed in to save him. He later went to Coach Boss' office and was attacked by several football players with bats.[1] He stumbled onto the football field where he begged for the Coach's mercy. He was later murdered and the Sheriff department refused to look into the case.[2]

Retrieved from "https://imagecomics.fandom.com/wiki/Dusty_Tutwiler_(Southern_Bastards)?oldid=36042"
Community content is available under CC-BY-SA unless otherwise noted.