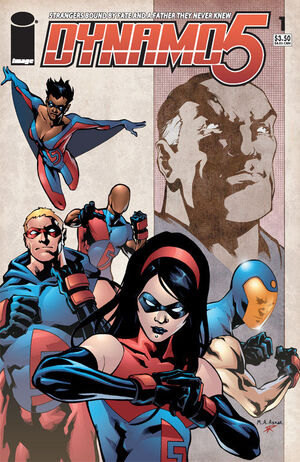 Dynamo 5 is a comic book superhero team appearing in their self-titled monthly series by Image Comics. Created by writer Jay Faerber and artist Mahmud A. Asrar, the team first appeared in Dynamo 5 #1 (January 2007; published March 2007). Dynamo 5 is a spin-off of Noble Causes, a previous comic book series created by Faerber, which also explores the dynamics of a superhero family. Unlike Noble Causes, Faerber has stated that Dynamo 5 will be more action-driven. [1] The team is composed of five young men and women, each of whom inherited one of the five superhuman abilities of their father, the late superhero Captain Dynamo, and their mentor and leader, Dynamo’s widow, Madeline “Maddie” Warner, who assembled the team following Dynamo’s death.

Faerber explained that his inspiration for the series came from a conversation he had with editor Andy Helfer, in which he was asked what made the Teen Titans unique. When Faerber opined that the Titans were like a family, Helfer pointed out that all superhero teams could be described thus as well. From this Faerber decided to create a team that was a family in the literal biological sense, but did not act like it. Faerber also indicated, perhaps half-jokingly, that he was also influenced by unresolved issues stemming from his parents’ divorce.

Faerber has indicated that the series will alternate back-and-forth between the private lives of each of the five kids, who will still maintain their separate lives in their home cities across North America, including their respective supporting casts, and their adventures as Dynamo 5. [2]

Captain Dynamo was the much-beloved protector of Tower City for forty years following his exposure to an unidentified form of radiation that granted him superhuman abilities, and husband of Maddie Warner, a former agent of a government superhero monitoring organization known as F.L.A.G., who used the cover of an award-winning investigative journalist, now retired. Dynamo was eventually found dead, naked in a hotel bed, the cause of death attributed to some type of poison on his lips, though the details of his death were not released to the public. He had been assassinated by Widowmaker, who had been hired by Hunter Blackthorne. Although Warner did not know this, she did suspect that condition and setting in which his body was found was not natural, but arranged by whoever murdered him in order to further tarnish his image. In sorting through his personal effects, Warner discovered his little black book, which was filled with detailed information on countless incidents of infidelity on his part. Although devastated by the extent of her late husband’s indiscretions, Warner was faced with the problem of Dynamo’s numerous enemies, who would now take advantage of Tower City in his absence. Although other superheroes attempted to pitch in to keep the peace, Warner decided that Tower City needed a permanent protector.

Scouring through the information she gleaned from her husband’s belongings, she located five young people she believed could be his illegitimate children: Vancouver, British Columbia high school geek Hector Chang, Washington DC law student and activist Olivia “Livvie” Lewis, aimless ne'er do well and ladies’ man Spencer Bridges, Hollywood, California theater employee and NYU Film School graduate Bridget Flynn, and Eastbridge, Texas high school football star Gage Reinhart. Gathering them together, Warner exposed the five to the same radiation that Dynamo had been exposed to forty years earlier, unlocking their own latent superhuman abilities, with each one manifesting one of the five powers that their father possessed. Donning costumes with the same color scheme and design as their late father, the five of them carry on his legacy as the superhero team the Dynamo 5, while coming to terms with learning about the father they never knew, and the four new half-siblings they each now have. Although the five are unaware that Warner is a former agent of F.LA.G., she is determined to mold them not only into a team, but into a family as well, and functions as their mentor and “unofficial sixth member”, calling the shots from the same headquarters once used by Captain Dynamo, and keeping in constant remote contact with them during their missions.

In their first published adventure as a team, Dynamo 5 went up against The Veil, a paramilitary organization that attacked Tower City with numerous soldiers, tanks, and even powered armor suits. Although Dynamo 5 acquitted themselves well against the Veil, Visionary was captured by them and spirited away before the battle was over. He was brought to the Veil headquarters, and interrogated for information on the team by the Veil’s leader, who calls himself The Superior. Injected with a serum to compel him to answer their questions, Visionary divulged everything about the team and how they were brought together by Warner. Before Visionary could answer the Superior’s question about the nature of the radiation that gave them and their father their powers, Warner and the rest of Dynamo 5 arrived and captured The Superior and his lieutenant. Ordering Dynamo 5 back to headquarters, Warner revealed that she was a former agent of F.L.A.G. and shot both the Superior and his lieutenant with gunshots to the head.

Smasher (formerly Visionary) Hector Chang was the first of Captain Dynamo’s children contacted by Maddie Warner. An intellectually curious Vancouver, British Columbia high school geek with a history with bullies and guidance counselors, Hector inherited his father’s vision powers, which include laser vision, x-ray vision, and telescopic vision. [3] When his powers were switched to those of his sibling Scrap, Hector renamed himself "Smasher". [4]

Menagerie (formerly Slingshot) Olivia “Livvie” Lewis is the daughter of a high-priced Washington DC lawyer, and a junior at Georgetown University. A driven activist who is involved with half a dozen different volunteer organizations (one of which has her working at a clinic), Livvie inherited her father’s ability of flight. Slingshot is the unofficial field leader of the team. She is respectful towards elders, and always addresses Maddie as “Ma’am”. When her powers were switched to those of her sibling Myriad, Olivia renamed herself "Menagerie". [5]

Wraith, (formerly Myriad) Spencer Bridges is a promiscuous womanizer who has never held a job for more than two weeks, though he never seems to be without financial means. Not surprisingly, he only agreed to join the team because Maddie is paying him. Spencer inherited his father’s shapeshifting ability. A loner who has grown up in various foster homes, Faerber has indicated that his shapeshifting ability will tie into his lack of direction in life, saying, “He inherited Cap's shape-shifting powers, and he can now become anyone he chooses. Maybe one day he'll figure out who he wants to be.” [6] When his powers were switched to those of his sibling Scatterbrain, Spencer renamed himself "Wraith". Spencer also has enhanced speed and strength due to an experimental drug. [7]

Supervision (formerly Scrap) Bridget Flynn is a NYU Film School graduate and Hollywood, California theater employee. Bridget inherited her father’s superhuman strength. When her powers were switched to those of her sibling Visionary, Bridget renamed herself "Supervision". [8]

Ramjet (formerly Scatterbrain) Gage Reinhart is a 17-year-old Eastbridge, Texas high school football star who led his division in tackles for the entire season, and is the darling of both his female schoolmates and college scouts. Gage inherited his father’s telepathy. Faerber has described Scatterbrain as “a popular, arrogant jock who never gave a damn about what anyone thought - until he can literally hear those thoughts. And he may not like what he hears.” [9] When his powers were switched to those of his sibling Slingshot, Gage renamed himself "Ramjet". [10]

Maddie Warner Madeline “Maddie” Warner is the widow of Captain Dynamo who assembled his five children, and acts as their leader, mentor, and “unofficial sixth member”,[11] keeping in constant radio contact with them during missions from their headquarters underneath the industrial pier formerly used by Captain Dynamo. Although she must deal with the fact that they are constant reminders of her late husband’s serial infidelity, she is insistent that they act not only as a team, but as a family as well. Despite her matronly role and demeanor with the team, she can be ruthless with enemies that she perceives to be threats, and will not hesitate to kill them. She is a former agent of the government superhuman-monitoring agency known as F.LA.G., which she has not disclosed to the team, adding ominously in Dynamo 5 #1, “Kind of makes you wonder what else I never told them, doesn’t it?”

Retrieved from "https://imagecomics.fandom.com/wiki/Dynamo_5?oldid=10095"
Community content is available under CC-BY-SA unless otherwise noted.