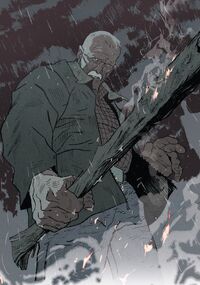 Earl Tubb played defensive end in his high school days for the Running Rebs.[1] He was the captain and remembered how the team picked on Euless Boss but he did nothing to stop them.[2]

Earl disliked his dad and joined army to head to Vietnam to get away from him.[1]

Years later, he returned to pack up house when Uncle Buhl was no longer able to take care of it.[1] He ran into Dusty Tutwiler at Boss BBQ. He saved him from being attacked by Esaw Goings which put him at ends with Coach Boss.[1]

When Earl's tires were slashed and his friend Tad was beaten, Earl headed into town to cause trouble and get the locals to rally around him. He was beaten to a bloody pulp by Coach Boss and died due to his injuries.[2] No one in town claimed to have seen this murder despite the whole town watching as he was attacked.[3]

Retrieved from "https://imagecomics.fandom.com/wiki/Earl_Tubb_(Southern_Bastards)?oldid=35983"
Community content is available under CC-BY-SA unless otherwise noted.