Start a Wiki
The Heap 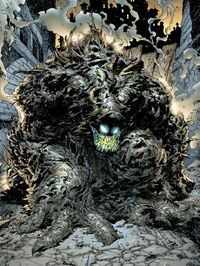 Eddie Beckett was a regular street bum in New York City. One day he walked through the alleys morning his wife's death due to cancer. He found a bag of Necroplasm that had been left behind by The Freak.[1]

Later, Eddie Beckett tried to score some goods off the Diminos, a drug dealer. They were reluctant to give the homeless man anything without an exchange. As Eddit left, the son of the drug dealer followed him as he overheard Eddie talking about something of value. Eddie cornered him in an alley and Eddie revealed his valuable item was the bag of Necroplasm. The son knocked it out of his hand thinking it's just snot and stabbed him in the chest and walked away. Eddie began bleeding out and was on the verge of dying. The Necroplasm creeped towards his wound and invaded his body transforming him into the Heap.

Soon, a sudden heatwave struck New York City. Meteorologists and geologists were unable to explain the phenomena as temperatures reach as high as 130 and many citizens flee the city. The Spawn headed to the Dead Zone to find Boots were he suddenly sensed a danger. The Heap absorbed Spawn into his body.[2] Spawn battled Heap attempting to break free of his hold. After continually smashing through him, and Heap rebuilding himself with trash growing larger and larger, Spawn began to despair as he was consumed inside the growing mess of Heap. Boots and Cogliostro arrived just in time to witness Spawn being swallowed alive by Heap. They approached the wreckage and found a Hellspawn Sigil on the ground, which are only left when a Hellspawn is slaughtered.

Spawn floated through a black abyss with no orientation of what was up or down. He was approached by a mortal appearance of Eddie Beckett. Beckett told him he was created by the Necroplasm merging with his body. He warned Spawn that someone was coming for him. Suddenly, something invaded Beckett's body and he spoke in a different voice. The new being pointed Spawn to a portal of white light and informed him his hour of reckoning was now.[3]

Retrieved from "https://imagecomics.fandom.com/wiki/Eddie_Beckett?oldid=66673"
Community content is available under CC-BY-SA unless otherwise noted.