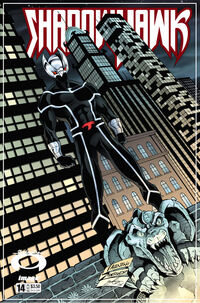 At the end of New Man #4, the robot was destroyed and Eddie Collins debuted as the new ShadowHawk. Having just moved to New York with his recently (one year) widowed father, James Collins, an electrician and, Eddie a young high school student was walking down a street when the helmet literally fell into his hands. The helmet called Nommo contains the spirits of all people who were, at one time, inhabited by ShadowHawk, the Spirit of Justice. Eddie Collins tried to meditate with the Nommo on, meeting the spirit of Paul Johnstone, who tells Eddie that he is a reincarnation of a first dynasty Egyptian shaman, how he was the last ShadowHawk and that Eddie is destined to start anew.

At first Eddie Collins widowed father, James Collins ordered him to stop, thinking it would kill him. But Eddie is faster, stronger and more agile now and finds new responsibility to the people of New York City. After saving some hostages, Eddie meets Captain Nieves and starts working with him.

Issue 1: Shadows and Light, Blacklight, a 1960's "Hippie Hero" woke up out of a 30 year coma and goes looking for his wife (Dayglo), who was killed by Firepower, and subsequently died ten years ago. He is lied to by a man in the shadows, thinking ShadowHawk is the son of Firepower. While at school, Eddie Collins is asked out by Colleen to the Sadie Hawkins dance and he says yes. That night, while stopping a convenience store looting, a fight starts between Blacklight and ShadowHawk, and ShadowHawk uses Blacklight's weakness against him but accidentally kills him.

Issue 2: Zapped, after killing Blacklight and now facing the reality of that, ShadowHawk must now deal with ZAP: he's fast, he flies, he shoots lightning bolts and he's been hired to kill ShadowHawk.

Issue 3: Here Comes the Night, after ZAP is defeated and placed in police custody, Captain Nieves said he would like to see Eddie Collins go though the Police Academy to learn the difference between superhero and vigilante. Eddie is attacked by the man who hired ZAP and lied to Blacklight, named Nocturn. After this encounter, Eddie runs across a fire, saves lives and meets a man (Venture, from Noble Causes) who knew the ShadowHawk before Eddie: Paul Johnstone. Later, Eddie goes to the Sadie Hawkins dance with Colleen, having a fun, normal life and netting a goodbye kiss. Out on patrol, Nocturn, who knows Eddie Collins is ShadowHawk, attacks him and, after a brutal fight, Hawk's Shadow comes out of the shadows to face his "returned" arch-enemy.

Issue 4: Back in the Shadows again, after being beaten nearly to death, ShadowHawk must now face Paul Johnstone's arch-enemy: Hawk's Shadow, who is now faster, stronger and driven like never before. He wants the Helmet of Heru (the helmet contains the spirits of all people who at one time were ShadowHawk) and he will remove Eddie Collins' head to get it! In the end Paul Johnstone usurps Eddie's body and beats Hawk's Shadow to near death, but Eddie stops him before the kill, saying "never again," and puts his enemy into police hands. Captain Nieves asks if ShadowHawk is still Paul Johnstone, to which Eddie replies, "Of course not, Captain. Paul's dead." Eddie goes home to a terrified father and says, "It's been a long night."

Issue 5 to 6: Dead Man Walking/Suffer Not a Corpse to Live, Eddie is looking for a mysterious corpse-like creature that is killing people. Along the way, he meets the new Blacklight, who is investigating the origin of her newfound powers. The two team-up to bring the vicious monster down. Their target turns out to be the first Blacklight, whom Eddie killed by accident, thereby giving the second Blacklight her powers.

Issues 7 to 8: My World on fire, Eddie's mentally unstable classmate, Philip Marko, has been setting violent fires around New York, and all the victims attend Nicholas Charles high school (Eddie's school). After ShadowHawk meets a mysterious red haired girl who has the power to deflect anything thrown at her, we discover Philip Marko now has the power of Pyrokinesis. After killing ten people at the high school and his mother, ShadowHawk stops him.

Issues 9 to 12: Rising, A man-beast named Komodo kills Eddie's best friend, Steven "Skeeve" Evans and defeats him. The helmet, the source of ShadowHawk's power, is taken by Luke Hatfield JR, aka Hawk's Shadow, who steps in and kills Komodo before the final blow is dealt to Eddie. Hatfield starts going on a killing spree in the criminal underworld. After the funeral of his best friend, Eddie retreats into a chasm of depression and self-doubt. Later, Eddie sees the mysterious red haired girl at school. After Hatfield is hunted by the cops, his father the Silver Age ShadowHawk shows up, telling him he is a disgrace to the name and has to take off the costume. We discover Hawk's Shadow was formerly "Squirrel", the Silver Age ShadowHawk's sidekick. Eddie learns that Steven Evans knew he was ShadowHawk. Vendetta (a Crime czar and old Paul Johnstone villain)looks for a new brain for Komodo, to revive him. The Ancient Egyptian Gods (the "Nommo") tell Eddie that power of ShadowHawk is within him and to reclaim his heritage. With the help of the new Blacklight, and Astroman, Eddie goes after Hatfield and wins, taking back the helmet.

Issue #13: Past Lives, Four stories! Four creative teams! Jim Valentino tells the story of Eddie Collins learning more about the past ShadowHawks that speak to him through his helmet:

After listening to the stories, Eddie Collins makes the decision that now he is going to be ShadowHawk on his terms, and after putting the helmet on, a new costume morphs around his body.

Issue #14 to 15: On the rebound, ShadowHawk will go face-to-face with the a mysterious red haired girl named "Rebound" who may change his life forever. As ShadowHawk learns more about her, The Corpse comes out of the dark to attack them. Steven Evans' younger brother pays a visit to ZAP! and Vort-X, who direct him to Vendetta, so he can carry out his desire to kill ShadowHawk, for whom he blames for the death of his brother. Phillip Marko aka Arson is alive and Komodo's body now has Luke Hatfield, Jr.'s brain in it. After Eddie Collins learns Rebound's real name, Jen Lyter, the two make love. James Collins calls Lina Juarez thinking he was hurt, but she tells him Eddie may be out with a girl at 4:30am.