Start a Wiki
The Reaper 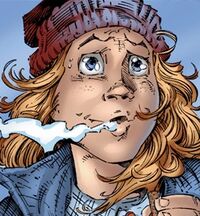 Eddie Frank is the older brother of Andy Frank and frequently saw his brother receive the brunt of his father's abusive beatings.

One day, Eddie attempted to stop his father at from beating Andy but this only fueled his anger. Joe beat Andy even harder to vent his frustrations. When Eddie brought home Spawn, the two looked up to him and saw him as an inspiration.

One night when Joe continued his abusive behavior, Eddie took matters into his own hands and murdered his father with his own gun to stop Andy's beatings.[1]

Later, the Frank brothers headed to New York City with hopes of seeing their 'friend' Spawn. They were caught up in an illegal drug trade by Snake the Dealer. Eddie did all the illegal activity as he felt a need to protect his younger brother. After an emotional outburst from their friend Spawn, they accidentally murdered Snake and were traumatized by the event. They traveled back home to Alabama but were never the same again.[2]

Eddie ended up in Juvenile Detention for his bad behavior and emerged with hatred for Spawn believing him to be the source of all the evil that's happened to him. Upon being released, he wrote a letter to his brother urging him to be good. He headed to New York once more, except this time with a gun. Upon arriving in the station, he pulled out the gun and murdered innocents in a mass shooting before taking his own life.

As he was being carted out, he was wrapped in heavenly light and was reborn as the newest Redeemer.[3]

His body was revived at the hospital which left doctors baffled with his one beat per minute heart rate. Meanwhile, his soul battled Spawn as the newest redeemer. When Mammon entered the hospital with the Box of Eden, the Redeemer retreated from battle leaving Spawn battered and broken in the desert where he was taken away by Demons to hell per Mammon's plan.[4]

Realizing the error of his ways, the Redeemer recognized his father was abusive and Spawn actually saved him. He retrieved the Box of Eden for Spawn and delivered it to him. They were all betrayed by Cogliostro when he stole the power of Hell and vanquished Al and Redeemer with his new power.[5]

Nyx struck a deal with the demon lord, N'Zzezheaal, to enter Hell and return with one soul. Nyx entered hell to find her friend Thea, who had been taken by Mammon.[6] When the Redeemer sensed the hellspawn suit, he immediately moved to attack. However, after being over powered he learned Nyx was searching for a friend and agreed to help if she helped him escape hell. She agreed, but lied as she knew she could only save one which she had planned on Thea.[7]

They later found Thea's soul but were asked to leave her be. Thea knew her body was dust and bones and she could not return to earth. Instead, she asked to be freed and the Redeemer gave Nyx his sword so that she could destroy her soul and release her from eternal torment. In return, Nyx returned to earth and brought the Redeemer with her.[8]

Eddie later returns as The Redeemer and appeared on Earth in an attempt to assassinate Jim Downing's girlfriend Sara while thinking she was a servant of Hell but relented after realizing she was a Christian and granted her one of his crucifixes to protect her against the hellish influences. The Redeemer then appeared to interrogate Jim to find the whereabouts of the Redeemer's wife Victoria, an angel that had earlier tried to kill Jim but had been defeated and removed of her wings by the Violator that left his wife an insane amnesiac wondering as a homeless womam. He attacked the Violator and engaged him in battle but was defeated when Violator called his horde of Vampire allies who damaged and mutilated the Redeemer.[9]

The Redeemer was later revealed to now be working for Violator after being bitten and turned into a Vampire-Angel Hybrid alongside his fallen angel wife Victoria. He was then sent to slaughter Bludd's vampires under orders by Violator for betraying their alliance.Then later on After Al Simmons returns The Redeemer and the Rapture plan on attacking Simmons and Al reveals that Eddie Frank's body is still in Redeemer's possession.

Upon returning to earth, the Redeemer found himself at war with Spawn. The two battled as the Redeemer believes he was protecting Nyx from harm. When Spawn defeated him, he used the Redeemer's own sword to cut off his wings. He was instantly transformed back into the boy, Eddie Frank, that Spawn had met twice before.[10] In Spawn 298 it's revealed that the Redeemer is still in control of Eddie's body.

Retrieved from "https://imagecomics.fandom.com/wiki/Eddie_Frank?oldid=67156"
Community content is available under CC-BY-SA unless otherwise noted.