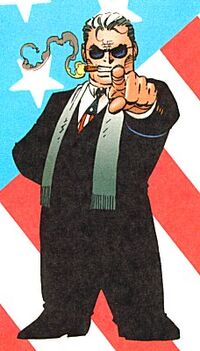 Like the other Kherubim on Earth, Lord Emp arrived on the planet when the Explorer ship he was travelling on crash-landed thousands of years ago, following an orbital battle with a Daemonite vessel (which was also brought down). The Kherubim mostly integrated themselves among the similar-looking humans, and for the next several centuries, they fought a secret war against the surviving Daemonites, who plotted to conquer their new world.

Over the centuries Emp was one of the leaders of the Kherubim, using a variety of aliases. In medieval times, Emp and his brother, Lord Entropy, fought side by side against the Daemonites. While battling the Daemonite Brannoch the Black, they killed Brannoch, but the Daemonite inside escaped and possessed Entropy's wife, Gwynith. Emp was forced to slay Gwynith and Entropy became mad with grief. He swore to avenge her and disappeared.

In the mid-twentieth century, he was one of the founding members of Team One, along with several other notable Kherubim and human fighters (including Mister Majestic, Zealot, Mason, Regiment, Isaiah King (a.k.a. Despot), John Colt, Think Tank (Henry Bendix) and Marc Slayton. They worked as a team for a number of missions, but eventually Emp fell foul of Helspont, one of the most powerful of the Daemonites. Helspont tried to slay him, but instead inflicted him with amnesia. Emp spent the next thirty years wandering New York as a vagrant, until Void tracked him down and told him about his past. Taking the identity of Jacob Marlowe, he quickly amassed a huge fortune, becoming a multi-billionaire, and together with Void he formed the WildC.A.T.S. with the purpose of thwarting the Daemonite Cabal. Soon Lord Entropy abducted Emp and restored his memories with his Orb of Power. Emp confronted Entropy with the truth, but Entropy was still unable to accept it. The WildC.A.T.S. came to his rescue and together they defeated Entropy.

When the team traveled to the Kherubim native world, Khera, he discovered that the social caste to which he made belonged, the Pantheon, had become corrupt. He became disillusioned with Khera, quitting the WildC.A.T.s, until Void made him forget the events on Khera.

After the team disbanded, Lord Emp decided to unleash all of his genetic potential, thus becoming a High Lord. In order to do this, he changed to some kind of alien form.

During this time, Emp restarted the WildC.A.T.s (calling them the Wildcats during this period) with Spartan, Grifter and the French weapons dealer Noir, to battle Kenyan, a man who Emp had granted immortality decades ago. During the showdown with Kenyan, Emp tried to convince Kenyan to kill him since he didn't need a corporeal form anymore. Instead, Kenyan killed himself. Emp then asked Spartan to kill him. Spartan did this, and inherited Marlowe's fortune, his company, and even his alias. The other Kherubim do not consider Emp to be dead, believing that his soul lives on as a being of pure energy, one with the universe.

Retrieved from "https://imagecomics.fandom.com/wiki/Emp?oldid=65422"
Community content is available under CC-BY-SA unless otherwise noted.