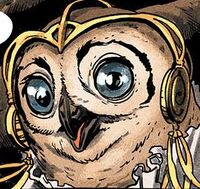 Enna was the daughter of Third Councillor Sandorst and acts as his apprentice. When Sandorst came to Keneil to participate in the wizard's conclave to summon the Great Champion, he took Enna with him. Though a member of his family, Sandorst seems to hold her in low regard, having her act as his porter during the duration of the journey. She quickly made friends with Dusty who and joined him and his friends in the audience is watching the wizards spell enact. Enna witnessed the destruction of Keneil, she was the one who comforted Dusty after he saw his father's corpse impaled in a tree from the city's fall.[1]

Retrieved from "https://imagecomics.fandom.com/wiki/Enna_(The_Autumnlands)?oldid=67997"
Community content is available under CC-BY-SA unless otherwise noted.