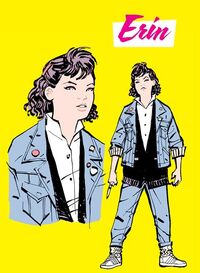 Erin Tieng is twelve year-old who tends to follow the rules. She lived a sleep life with her sister and family in Stony Stream, Ohio. She became caught up in time-travel along with a ragtag group of friends.

Erin ran paper routes and would wake up early to deliver. Halloween was always known to be a treacherous time for paper girls. She woke up early the day after Halloween and was attacked by several teenagers. She ran into Mac who helped her. She learned on Halloween one year ago, Mac, a fellow local paper girl, formed a small group of other paper girls to help protect each other from ruffians on Halloween. They arrived in time to save Erin from the boys and agreed to form a small party to help each other deliver papers. They used walkie-talkies to communicate and moved in groups of two.[1]

Later, one of the girls had her walkie-talkie stolen from her. The girls chased after the three masked robbers into an abandoned neighborhod. They stumbled upon some form of advanced machinery in a basement and were suddenly transported to another time when they got too close to the machine. They wandered outside and found things very different in their neighborhood. Mac spotted the robbers and attempted to off his mask. She revealed he was a strange looking man speaking an alien language.[1]

The girls retreated to Erin's home where they tried to dissect what was happening. It appeared all the parents had suddenly left town. Mac proposed they head to her home as her father had a gun. Erin tried to tell them that they were supposed to call a grown-up in times of need. Mac picked up the phone to show here there was no dialtone, and they agreed to ride as a pack to her house.

A group of flying dinosaur-esque creatures circled above them as they arrived at the home. Inside, they found Alice Coyle, Mac's stepmom. Alice stumbled and appeared drunk as she told them Mac's father had disappeared into thin air as soon as the creatures arrived. She then pulled out a gun and tells them the Lord had brought the end of the world. Mac dove to stop her mother as a gunshot was fired off. The paper girls watched in horror.[2]

Erin found she had been shot and needed to be rushed to the hospital. When they turned to Alice to drive, she had mysteriously disappeared like many of the other residents. Tiffany offered to drive and they hopped in. When they were confronted by a mysterious stranger, Tiffany got out to let the man know that they needed to get Erin help. However, he soon had his head blown off by the ninja teenagers that stole their walkie-talkie. They removed their masks to reveal they were mutated and informed the girls that man wouldn't have helped them.[3]

Erin later woke up with Heck and Naldo scurrying about their warehouse. She found they had put iNsecs in her stomach, small electronic bugs, to heal her. The teenagers are dying due to a gas leak but tell her they will help her return as she reminded them of their younger selves. They take off in the time machine and return her to the basement where they originally found the time machine. Erin emerged to find her 3 paper girl friends waiting. However, their reunion was cut short when the Grandfather announced he was outside and needed to speak with them. He claimed everything the teenagers told them has been lies.[5]

Retrieved from "https://imagecomics.fandom.com/wiki/Erin_(Paper_Girls)?oldid=55407"
Community content is available under CC-BY-SA unless otherwise noted.