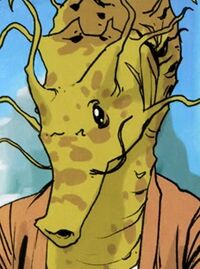 Erving is responsible for brokering Freelancers to various jobs. He was strong-armed by Gwendolyn to tell her where The Will was located when his Freelancers were not finishing off Marko fast enough for the Wreath High Command.[1] Later, he fired the Will for not completing a job after about a decade, and informed him that he was closing his entire Freelancing branch.[2]

Retrieved from "https://imagecomics.fandom.com/wiki/Erving_(Saga)?oldid=60249"
Community content is available under CC-BY-SA unless otherwise noted.