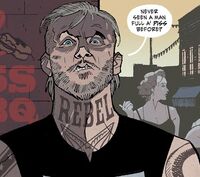 You think that book has the power to save, huh? Let's see if you're right.

Esaw Goings is a degenerate ex-football player for the Running Rebs. He works with the Coach Boss and was ordered to attack Dusty Tutwiler upon his behalf. When Earl Tubb overheard the disturbance, Earl rushed in to save Dusty by striking Esaw in the face with a frying pan.[1]

After Dusty was killed later by Coach Boss. Earl approached Esaw and Materhead at Boss BBQ. He physically threatened them to tell him where Dusty was located.[2] After Earl pushed is luck too far and threatened Coach Boss in public, he witnessed the coach beat Earl to death in the street in front of the whole town.[3]

Later, a funeral was held for Earl. Esaw was shocked that Coach Boss would go and have the gall given he had murdered him. He later was surprised that Coach Boss mounted the Tubb Bat in Coach BBQ as a symbol for the town that everyone should obey Coach Boss.[4]

Later, Donny Ray attempted to save Esaw's soul as a part of his work for the lord. He was brought on a ride-a-long with Esaw. He saw how he pulled $300k from the bank funds to purchase illegal weapons. He was then beaten half-to-death and asked if this was the lord's plan. Donny gave up on trying to save Esaw.[5]

That same day, Esaw was offered a defensive coaching position by the coach. When he attempted to draft up plays, he found he was horrible at it as he only knew blitz plays.[5] As Tad recovered in the hospital, Materhead would visit him and bring him Running Reb paraphernalia in hopes to make up for his actions. Materhead began witnessing a dog that resembled Rebel, the school's old mascot. When Materhead asked Esaw for advice and cautioned him that there are superstitions with bad luck and the dog, Esaw laughed at Materhead. He told him that Rebel is long-dead, they had killed him after he bit Coach Boss and the team then lost to Wetumpka, a big school rival.[6]

The school soon took the field against Wetumpka as Esaw cheered them on as their new defensive coordinator.[6] However, the cheers were cut short as they were stomped. The Wetumpka Warriors had a running back that was nearly twice the size of their largest man. As the defensive coach, Esaw recommended they cheat and attempt to break the boy's knees. Coach Boss became furious that Esaw would win this way and fired him as the defensive coordinator. He put Materhead in charge of the defensive coaching position but it didn't matter, the Rebs were crushed by the Warriors and lost the important game.[7]

Retrieved from "https://imagecomics.fandom.com/wiki/Esaw_Goings_(Southern_Bastards)?oldid=55082"
Community content is available under CC-BY-SA unless otherwise noted.