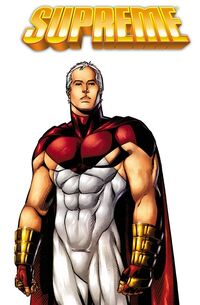 Supreme is a superhero created by Rob Liefeld. He was originally a violent, egotistical Superman archetype, but was rebooted by Alan Moore to pay tribute to the classic Silver Age Superman mythos, as guided by Mort Weisinger.

Supreme is also the name of a comic book which lasted 56 issues. Alan Moore started with issue 41 and his run would later be collected as two trade paperbacks by Checker Book Publishing Group: Supreme: The Story of the Year and Supreme: The Return. Moore's work on the series won the 1997 Eisner Award for Best Writer.

Supreme was originally introduced in issue 3 of Rob Liefeld's initial Youngblood limited series as a flipbook story, and he was later spun off into his own series, which Liefeld occasionally worked on. His history varied from story to story; at one point, he was an extremely religious angel of vengeance, who cited Scripture to justify his actions. At other times, Supreme considered himself to be a god, especially after defeating the Norse god Thor and taking his mystical hammer, Mjolnir. Although considered to be the most powerful being in the Liefeld universe, he had his share of defeats, including being killed in the cross-title Deathmate Black series (published by both Image and Valiant Comics), losing his powers in Extreme Prejudice, and being brutally killed by Crypt in Extreme Sacrifice.

Supreme was eventually given a more comprehensive treatment in The Legend of Supreme, a three-issue miniseries by Keith Giffen and Robert Loren Fleming. In the story, a reporter named Maxine Winslow investigates the "origin story" of Supreme. As the story unfolds, we learn that in 1937, Ethan Crane shot and killed two men in retaliation for the rape of a 15 year-old girl. Crane was subsequently shot by two police officers, but he survived and was sentenced to life in prison. In prison, the government offered him a chance to participate in an experiment to enhance humans, hoping that unlike the six previous guinea pigs, he would survive.

Unfortunately, Crane perished like the others; but unlike the others, he came back to life. The outside world was strange and new to him. Making his way to a church, Crane found sanctuary given by Father Beam, and soon discovered some of his new abilities. He took the name "Supreme," and upon hearing about the ongoing war in Europe, he decided to do his part. Not much was revealed about Supreme's work in World War II, but it is known that he joined the Allies. After the war ended, Supreme felt that he had done his part, playing a good Samaritan to society, and left Earth. In reality, the accidental death of Father Beam at his hands drove him away.

Supreme spent decades in space, fighting against various threats on the side of an alien race known as the Katellans (the race of Gary Carlson and Erik Larsen's Vanguard). He eventually returned to Earth in 1992 to find a greatly changed society, complete with genetically enhanced superpowered humans that could be found in teams like Youngblood and Heavy Mettle. Supreme became the field team leader of Heavy Mettle for a short while, but soon left the position after defeating the villain Khrome.

As Supreme fought Thor over the possession of Mjolnir, another character by the name of Enigma acquired another Supreme from an alternate timeline, to be kept in storage in case Supreme was defeated. Supreme did not lose, so the other Supreme was left to his own devices (most importantly in the events of The Legend of Supreme). Supreme eventually appeared to die during an assault on humanity by Lord Chapel, but in actuality, he ended up stranded on an alternate Earth. There, he spent several years until the alternate Supreme originally removed from this reality by Enigma returned and was overpowered by the original Supreme. The original Supreme managed to switch bodies with the alternate Supreme, thus restoring his powers. After various events involving Probe, Supreme's daughter from the future, and Enigma, the original Supreme, the alternate Supreme, Probe, and Enigma all worked together to defeat the evil Norse god Loki, whose machinations had been the cause of the various shifts between realities. In the end of Supreme no.40, loose ends had been wrapped up, and, while Probe remained on the alternate Earth, Supreme returned to Earth.

Alan Moore was asked by Rob Liefeld to write further adventures of Supreme. Moore agreed, on the condition that he could throw out everything previously done with the character, as he felt the comic was "not very good." Beginning with issue 41 of Supreme, Moore began retooling Supreme, using multiple layers of metafiction, with each issue containing commentary on comics history, storytelling, and the Superman mythos. The clichés of the superhero genre were frequently used without Moore's characteristic deconstruction and sense of irony. He stated in interviews that it was also something of an apology, as he had become famous for deconstructing superhero characters in various dark ways.[1]

The Story of the Year

This new version of Supreme had a secret identity as Ethan Crane, a mild-mannered artist for Dazzle Comics, who received his powers as a result of a childhood exposure to a meteorite composed of pure Supremium, a meta-element that can alter reality. When not saving the world as the archetypal superhero, Crane illustrated the adventures of Omniman, a Supreme-like character undergoing a re-launch with a change of writers.

Moore did not simply ignore the events of the previous issues; he turned them into a central part of his Supreme storyline. In Moore's first issue, Supreme returned to Earth from space and discovered that not only was he living in the most recent "revision" of reality, as it is an ever-changing story, but that there had been many previous versions of himself. Retired Supremes lived in another reality, dubbed the "Supremacy" by its inhabitants, an afterlife for characters whose stories had come to an end. Supreme first suffered from amnesia, but quickly learned that his returning memories were "backstory" that was gradually being filled in. As Supreme himself mused while visiting the site where he first gained his powers: "Maybe I really did just pop into existence a few weeks ago [...], but standing in that hole I felt something. I felt a long, peculiar life well up around me, and even if my life is a tale the Universe wrote only yesterday, it started right there, in that ditch." As Supreme's memories "returned," the flashback sequences to Supreme's childhood and previous adventures were told in the style of different periods from comics history.

Supreme now also had a sister with identical powers, Suprema, and a superpowered dog, Radar the Hound Supreme, who was as intelligent as a human being, though he still very clearly had a canine mindset; these two characters were clear references to Superman's cousin Supergirl and his dog, Krypto, though it's worth noting that they were still distinctly different from the characters to whom they paid homage.

Darius Dax was also introduced in this storyline. He was a Lex Luthor-styled evil genius who begrudged Supreme. Dax died twice in the series. The first time, he died in prison of lymphatic cancer caused by exposure to Supremium. Before he died, Dax transferred a copy of his consciousness to "micro-machines, no bigger than dust mites" which he concealed in a book. He mailed this book to Judy Jordan (a Lana Lang analog) just before his death. When she opened the book, Judy inhaled the dust and the copy of Dax's consciousness was transferred into her brain after her own personality was erased. Dax used Judy's body to trick Supreme and trap him in his own prison. Dax went on to abandon Judy's body in favor of a superpowered android body. Still unable to beat Supreme, he merged the android body with Supremium, but died again after he merged with the Supremium...only to become the Supremium Man, returning to Earth twice, and finally melting into a lump of Supremium - by an astonishing twist of fate, the very lump which landed as a meteor and gave Supreme his powers in the first place.

Moore's work on the book continued until Supreme no.56, at which point the series ended. It was then followed up by the six-issue series Supreme: The Return, until it was abruptly cancelled as well. Moore had written an additional two issues which were never published.

Following the defeat of Darius Dax, Supreme would find an ember of Judy Jordan's consciousness still in her body, which he transferred to an android, Suprematon. Her new artificial body was endowed with superpowers, but Judy found trouble adjusting to another body and having missed the last 20 years of her life. S-1, the only other sentient Suprematon, would confess his love for Judy. S-1 changed his name to Talos, and the two were married by Supreme in the Flying Citadel. The new couple leaves Earth and finds an uninhabited planet to live.

Ethan Crane's growing romance with Diana Dane started to falter after he would "get all weird and run away." He tried to reconnect with her as Supreme (after arranging a meeting as Ethan). Supreme gave her a tour of the Citadel to give her ideas for Omniman.

After Darius Dax died at the end of The Story of the Year[2], he was sent to a place similar to the Supremacy, called Daxia. Every version of Dax before him lived in Daxia, including Darius Duck, Daxor, Daxian, Doomsdax, Mad Nazi Scientist Dax, and "Grim" Serial-Killer Transvestite 80's Dax. The combined intellect of the Daxes let him cheat death once more and return to the land of the living.

In 2006, Arcade Comics is publishing Supreme's return by Robert Kirkman and Rob Liefeld. It will not complete Alan Moore's run. Supreme Sacrifice does include aspects created by Moore including the Supremacy. More specifically, it will deal with Liefeld's original 90's Supreme and his forced retirement in the Supremacy.[1]

During World War II, Charles Flanders[8] discovered he could tap into Supreme's power, and he became Supreme's sidekick, the first Kid Supreme. The second Kid Supreme was Danny Fuller[9] after he received super powers during a fight between Supreme and Union. Alan Moore's Kid Supreme is merely a younger version of Supreme as an homage to Superboy.[10]. He was also Supreme-Mite when he first received his powers as a toddler.

The biological future daughter of Glory and Supreme, named Probe, although she once believed that she was a test tube baby until Glory told her the truth. This character was removed from reality after the Supreme continuity was rebooted by Alan Moore, though she still exists in the Supremacy.

In her place, Supreme's sister Sally Crane became Suprema. When Darius Dax merged with the Supremium, he became "too heavy for the space-time continuum" and he fell through a crack in reality. He emerged in the past, specifically, on Sally's birthday. Dax fell to Earth in front of the Cranes' residence. Sally's proximity to the incident gave her white hair, and later, she learned she had similar powers as well.

When Supreme left Earth, Suprema took over duties in his absence. Gorrl, the Living Galaxy, came looking for revenge against Supreme. Since he couldn't find him, he threatened to absorb the Milky Way Galaxy unless he was given a "suitable human companion." Suprema volunteered if Gorrl would spare the star system. Grorrl brought her to the edge of a black hole where time passes differently than in normal space. As a result, Suprema spent 30 years there, in the blink of an eye. After those 30 years, Supreme finally came to rescue Suprema. They were able to convince Gorrl that a human companion was unsuitable and he should be with his own kind. Gorrl allowed her to leave and she was able to return home.