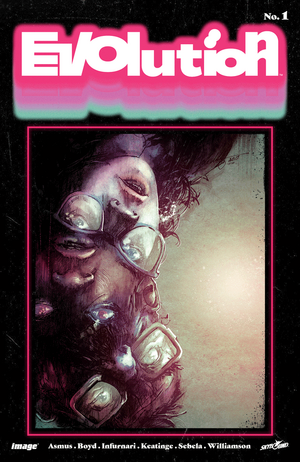 Human evolution has taken millions of years to get to this stage. But next week, we become something new. Around the world, humanity is undergoing rapid and unpredictable changes, and only three individuals seem to notice that their world is being reborn. But what can they do about it? Skybound unites writers JAMES ASMUS, JOSEPH KEATINGE, CHRISTOPHER SEBELA & JOSHUA WILLIAMSON and artists JOE INFURNARI & JORDAN BOYD to create a new global phenomenon in this oversized debut issue.

Retrieved from "https://imagecomics.fandom.com/wiki/Evolution_Vol_1_1?oldid=63009"
Community content is available under CC-BY-SA unless otherwise noted.