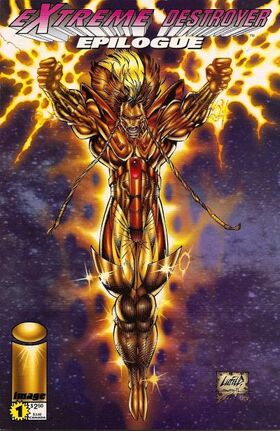 After sending Diehard 3000 units against the Keep, Alan Keever reviews the conflict thus far.  On the Keep mother ship, Quantum kills the aliens’ leader, Communion.  New Man frees Glory and teleports with her to Earth to join the other heroes in battle. Meanwhile, the New Men fight the New Guard as Dash confronts the Shepherd.  She argues with him about the Keep until his staff transforms her into a golden-skinned being like him.  They then embrace and kiss.  Black Jack frees other human prisoners but is killed by a Keep guard.  On Earth, Marla Thomas tries to shoot Battlestone, but Extreme Warrior jumps into the path of her shots and dies.  Cabbot is then killed when he pushes Stone out of the path of a Keep missile.  Sentinel brings a despondent Shaft to Keever.  Dredd wants Shaft sent back into combat, but Keever refuses.  Above, the mother ship’s systems crash, and the New Guard rush to save it.  Dash pleads with the Shepherd to help her save Earth.  Below, Quantum takes on Imperion and wins.  Maximage and New Man combine their powers to teleport all the remaining human prisoners on Keep ships back to Earth.  Under Keep tradition, Imperion is now Quantum’s slave, and Quantum orders him to leave Earth and never return.  The Shepherd senses the Keep is leaving and asks Dash to come with them, but she refuses and reverts to human form.  Quantum proclaims himself the Keep’s new ruler and leaves to lead them away from Earth forever.  The Shepherd kisses Dash goodbye and leaves her with the New Men.  Byrd decides to leave with him while Sundance elects to stay on Earth.  As the Keep and the Shepherd depart, New Man tries to teleport Colonel Bravo and Link back to their own time but discovers he cannot.  Later, Keever drafts a report on the conflict as Glory finds Shaft depressed that his skills may be the result of the Nu-Gene, not his own hard work. She insists he join her in celebrating their victory.