Keeper of the Message 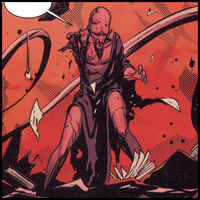 Ezra Orion was the keeper of the Message and has studied it's contents for so long that he is now considered the foremost expert on the meaning of the Message.

As a baby, he was found by Famine and both named and raised by her to become the Keeper of the Message. Even though Famine has been reincarnated as a boy, he still refers to him as mother.

Retrieved from "https://imagecomics.fandom.com/wiki/Ezra_Orion_(East_of_West)?oldid=67402"
Community content is available under CC-BY-SA unless otherwise noted.