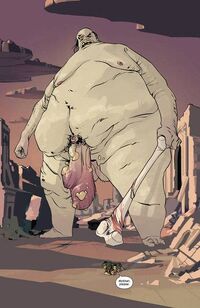 Fard is a gigantic triclops on the planetoid that Marko and Klara visited when searching for Izabel.[1]. After becoming subdued, he revealed to them that the planetoid was actually an egg that would hatch soon.[2]

Retrieved from "https://imagecomics.fandom.com/wiki/Fard_(Saga)?oldid=60240"
Community content is available under CC-BY-SA unless otherwise noted.