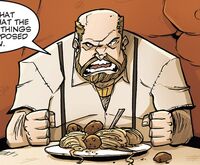 Federico Biscotti is a powerful mod-boss. When he ordered the same thing as Sage Chu, she used her food based powers Cibropanthropatic to see into his memories. Discovering he has killed many people before, he called him out in public. He was brought down when Sage enlisted the help of her older sister Toni and NASA.[1]

Retrieved from "https://imagecomics.fandom.com/wiki/Federico_Biscotti_(Chew)?oldid=23931"
Community content is available under CC-BY-SA unless otherwise noted.