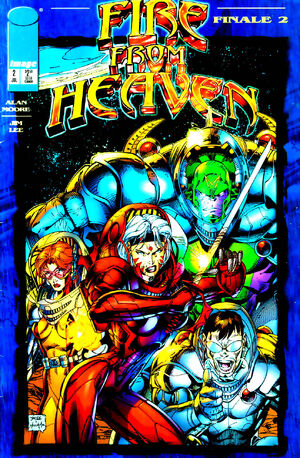 Appearing in "Fire From Heaven Finale, Part 2 of 3"

Plot Synopsis for "Fire From Heaven Finale, Part 2 of 3"

On the moon, Majestic asks Hadrian (Spartan) if he is alright, but he says not to call him Hadrian because he is John Colt again. Colt takes charge of all the heroes, ordering Hellstrike to take a Stormwatch team in for a preliminary sweep. Fahrenheit objects to taking orders from a WildCAT, but Hellstrike says Colt is the best, and Battalion confirms this, saying he kept a scrapbook of Colt's exploits when he was a kid. They then come across Union and the Sword of Damocles battling. They report in to Colt, who has Void teleport the rest of the heroes to Hellstrike's location. Before teleporting, though, Colt asks if everyone is assembled, and it is revealed that the gigantic Dozer from Wetworks was too big to be teleported to the moon, so space tugs are currently pulling him toward the moon. Colt says there is no time to wait, so they teleport off.

After they arrive at Hellstrike's location, Fairchild sees a light in the distance and knows that is where Team 7 is battling Damocles. She heads off to help along with Freefall. Zealot starts to follow them so she can help Grifter, but Colt orders her to stay and sends Battalion in her place. Union then defeats the Sword as seen in Finale 1, and Union informs Colt of the monstrous engine that is set to propel the moon into Earth. Colt says that Majestic, Union, and Hellstrike will go with him to neutralize the engine, while Mother One and Zealot will lead the rest of the heroes to reclaim the conquered moonbase.

At the moonbase, the Bounty Hunters are aware of the incoming force of superheroes but are unconcerned because there are dozens of bounty hunters in the base with them. But then Hardball says that everyone left to watch the firing of the great engine, so they four are the only ones at the base. Then the wall collapses and the heroes charge in. A fight ensues, during which Fahrenheit blinds One-Eyed Jack with a blast of fire. Zealot confronts Jade, known as the blade mistress, and they fight. Zealot ends up impaling Jade on her sword. Then the Bounty Hunters make their escape by teleporting out of the moonbase.

Meanwhile, the battle rages at the engine as John Colt, Majestic, Union, and Hellstrike battle through Damocles' bounty hunter army. It is looking to be a long, protracted battle, when suddenly the bounty hunters turn and flee. The heroes look behind them and see the enormous Dozer drifting down toward the moon's surface. They get closer and they realize he's falling straight toward the engine and will crush them as well, so they flee. He does end up landing on the engine, destroying it and eliminating the threat of the moon crashing into Earth. Then Zealot and her team from the moonbase arrive, and everyone agrees they must head over to help Team 7 battle Damocles. As they travel, Freefall tells Burnout that she has the uneasy feeling that someone close to them is going to die. Then everyone stops and shields their eyes as a huge column of fire erupts into the sky in front of them.

Retrieved from "https://imagecomics.fandom.com/wiki/Fire_From_Heaven_Vol_1_2?oldid=63937"
Community content is available under CC-BY-SA unless otherwise noted.